Children in fatherless families are more likely to be victims of violent crime. 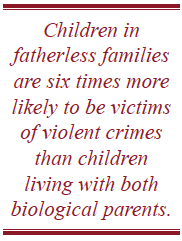 “There’s no more important ingredient for success, nothing that would be more important for us reducingviolence than strong, stable families — which means we should do more to promote marriage and encourage fatherhood.”
–  President Barack Obama, Remarks by the President
on Strengthening the Economy for the Middle Class,
speech given at Hyde Park Academy, Chicago, IL,
15 Feb. 2013. The White House, Office of the Press Secretary, Web. 29 Sept. 2014.

The presence of a father in the home not only significantly reduces the chances of his children perpetrating a crime; it also serves to shield the entire family from being victims of crime.  Tragically, children and mothers in fatherless families are at increased risk for becoming victims of violent crime. 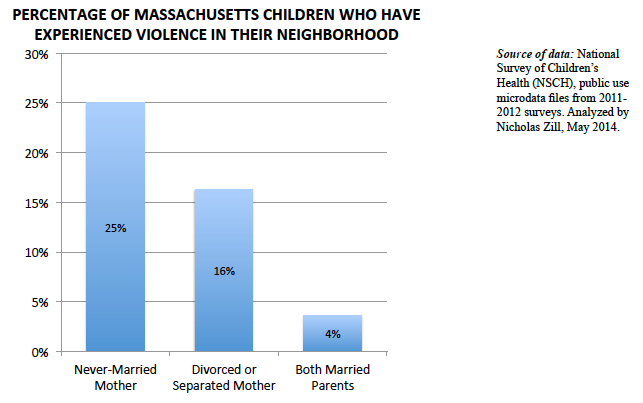 In the 2011-2012 National Survey of Children’s Health, among Massachusetts children under the age of 18 who lived with their never-married mothers, 25 percent had been the victim of violent crime or had witnessed a violent crime in their neighborhood at some point in their young lives. This was six times the rate among children living with both biological parents
(4 percent).

Of children who lived with separated or divorced single mothers, 16 percent had experienced violence in their neighborhoods.46 Similarly, the 2010 National Crime Victimization Survey conducted by the U.S. Department of Justice found that households with children headed by an unmarried mother were three times more likely to have at least one member age 12 or older who experienced violent crime victimization in the last year as households with children headed by a married couple (6.3 percent versus 2.3 percent, respectively).47 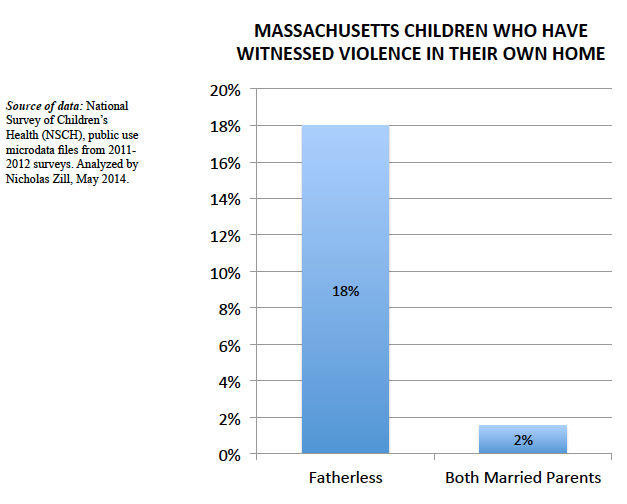 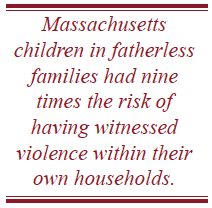 Parent respondents in the National Survey of Children’s Health were also asked whether their child had ever seen or heard “any parents, guardians, or any other adults in the home slap, hit, kick, punch, or beat each other up.” Massachusetts children who lived with never-married mothers or separated or divorced mothers had nine times the risk of having witnessed violence within their own households; 18 percent of these same children had witnessed violence involving caregivers or their friends or relatives. Among children living with both married parents, the comparable rate of family violence exposure was less than 2 percent.48