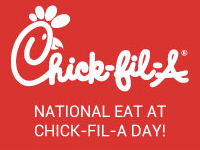 On Friday, we told you how a great American company, Chick-fil-A, was being smeared and threatened by anti-Christian activists, including our very own Mayor Menino.   Almost a thousand of you have signed our petition demanding that he make Boston a city of true tolerance and diversity of opinions.   Those of us who stand for traditional, natural marriage need to be encouraged by Chick-fil-A’s slogan of “Eat More Chicken”–not act like one.  The popular food chain, which is even more beloved by employees for its family-friendly policies, isn’t shying away from its biblical roots.  Despite fierce pressure from the Left, CEO Dan Cathy is planting his feet in the face of criticism and reiterating that their business is as God-centered as it ever was.  Asked about the franchise’s support for family values, Dan responded, “guilty as charged.”

Now we’ve learned that pro-family advocates have dedicated the next two Wednesdays as National Chick-fil-A Days. Our friends at the National Organization for Marriage are encouraging faith and family supporters to eat at Chick-fil-A tomorrow, July 25th.  Governor Mike Huckabee is on board as well, using the platform of his popular radio program to promote next Wednesday, August 1, as a day to support Chick-fil-A by stopping in for some more chicken.  Some of us older Bostonians can remember the “Wednesday is Prince Spaghetti Day” slogan so “Wednesday is Chick-fil-A Day” should fit right in!

Not surprisingly, same-sex activists are already threatening to stage a “Gay Make-out” day, occupying Chick-fil-A restaurants as lewd exhibitionists on August 3.   Is there no shame?!   We here at MFI will gladly do our part, having an office lunch at Chick-fil-A on BOTH this Wednesday and the next!  There are two locations in Massachusetts; at the Burlington Mall and the North Shore Mall in Peabody.   Please join us!