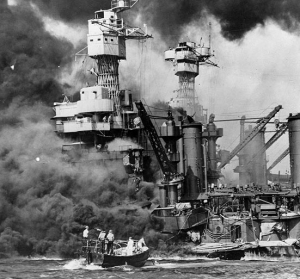 Before there was a September 11th, there was December 7th – Pearl Harbor Day. The infamous Japanese sneak attack claimed the lives of nearly 2,400 servicemen and women, and led the United States to enter the Second World War.

In today’s Washington Times, Carol Gladys, the secretary of the Sons and Daughters, Pearl Harbor Survivors Inc., explains how important it is to continue to talk about Pearl Harbor: “I think we have a lot of work ahead of us. You walk up to a lot of younger people and ask them what the USS Arizona was, and they have no idea. They younger generation, they have no idea what happened in Hawaii.”

Say a prayer today for those who lost their lives 70 years ago today, for those still living who are haunted by the memories of that day, and for our nation, that we never forget the cowardly sneak attack that thrust our nation into war.