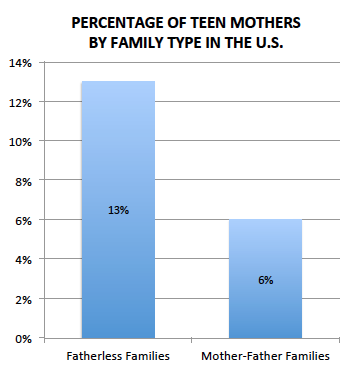 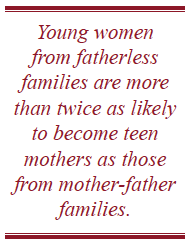 college degree and achieve economic security. Unmarried adolescent mothers are more likely to be poor and welfare dependent than young women from similar backgrounds who delay childbearing. When daughters of poor single women then have babies as unmarried adolescents themselves, the wheel of persistent poverty keeps turning.

Large-scale longitudinal studies that have followed national samples of youth from adolescence into adulthood have found that young women from fatherless families are more than twice as likely to become teen mothers as those from mother-father families.

In the National Longitudinal Survey of Youth (NLSY), for example, 27 percent of young women from fatherless families became mothers as teenagers, compared with 11 percent of young women from two-parent families who did so. Thirteen percent of the women from fatherless families, versus 6 percent of those from mother-father families, were unmarried teens when they gave birth for the first time. These contrasts were adjusted for related risk factors such as low parent education and family income levels and minority ethnic background.49

Having married parents reduces the chances of a young woman becoming a teen mother even in households with very low levels of education. In the NLSY sample, young women whose mothers have less than a high-school education as well as being unmarried are especially vulnerable to giving birth before age twenty. Forty-four percent of white women from such backgrounds became teen mothers, as did 45 percent of black women and 46 percent of Hispanic women with similar family backgrounds. These rates of teen parenthood were one-and-a-half to two times higher than those for young women whose parents had low education levels but were married to one another.50 This demonstrates that the problem of unwed teen pregnancy will not be solved by education alone but rather requires the intergenerational support of marriage.

Once again, in communities where marriage is in decline, the damaging effects of multi-generational fatherlessness are the most ominous.  Rates of birth to teen mothers are far higher in Massachusetts cities with high proportions of single-parent families than in cities with relatively low concentrations of single-parent families. In Springfield in 2015, for example, there were 31 teen births per 1,000 women aged 15-19 in the city’s population, whereas in Cambridge there were less than four teen births per 1,000 young women in the same age range. In New Bedford in the same year, there were also 31 teen births per 1,000 young women, 23 in Brockton, but only 6 in Quincy.51