“… [W]here the marriage culture collapses and families fail to form or easily dissolve … the health, education,and welfare functions of the family will have to be undertaken by someone, or some institution, and that will sooner or later be the government.”
– Robert George, “No Mere Marriage of Convenience: The Unity ofEconomic and Social Conservatism.” First Things. N.p., 16 Nov. 2012. Web. 29 Sept. 2014. 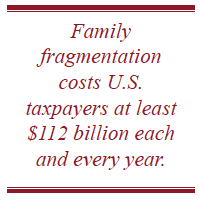 While the costs of fatherlessness and family decline borne by children are profound and tragic, financial costs to our Commonwealth and nation are enormous. According to a major study on the economic impact of single-parent families, “family fragmentation costs U.S. taxpayers at least $112 billion each and every year, or more than $1 trillion each decade.”52

In addition to their share of the federal tax burden caused by fatherlessness, Massachusetts taxpayers spend nearly $1 billion battling the same problems here in the Bay State.53 When single mothers are unable to earn enough for their families or absent fathers do not provide support for their children, the citizens of Massachusetts end up supporting them. 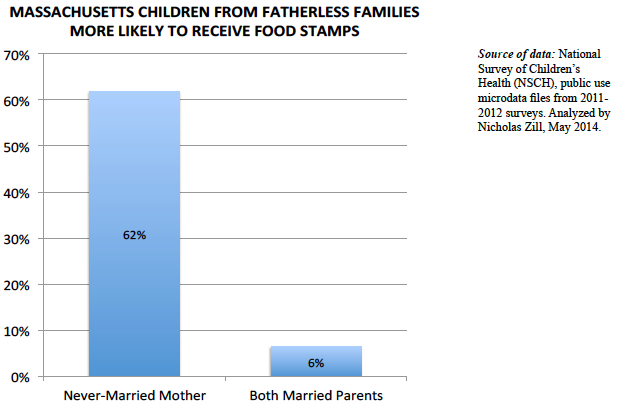 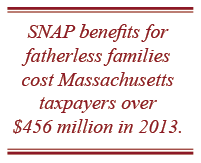 In 2011-2012, 62 percent of Massachusetts children with never-married mothers were in families receivingSupplemental Nutrition Assistance Program (SNAP) benefits (ormerly the food stamp program). Thirty-five percent of children with divorced or separated mothers were also supported by SNAP, as opposed to only 6 percent of children living with both married parents.54 SNAP benefits for fatherless families cost Massachusetts taxpayers over $456 million in 2013, one third of the total state spending under the SNAP program that year.55 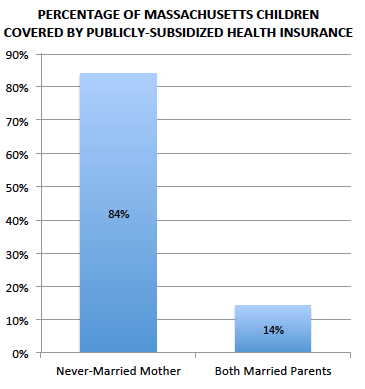 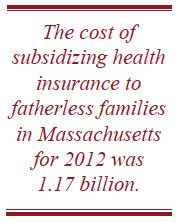 The cost of putting food on the table is dwarfed by the additional expense of providing health care for fatherless families. As of 2012, 84 percent of Massachusetts children with never-married mothers were receiving publicly subsidized medical insurance such as Medicaid/MassHealth, or CommonHealth, as were 57 percent of children with divorced or separated mothers. By comparison, among children living with both married parents, only 14 percent received publicly subsidized health care.56 The cost of subsidizing health insurance to fatherless families in Massachusetts for 2012 was $1.17 billion.57 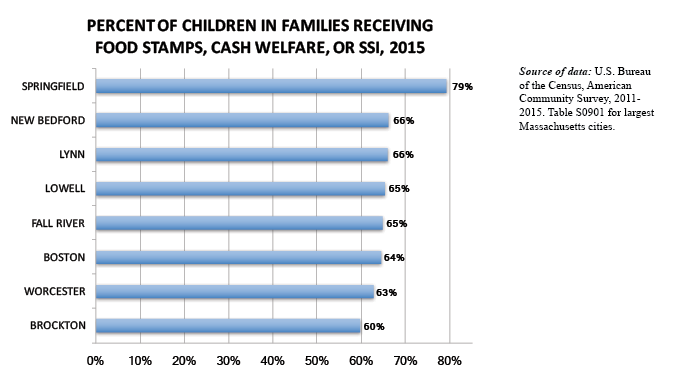 Once again, these problems are intensified in communities with high levels of fatherlessness. For example,
during the period 2011-2015, nearly four-fifths of children in fatherless families in Springfield were receiving food benefits, cash welfare, or supplemental Social Security income (SSI). The same was true of nearly two-thirds of children in 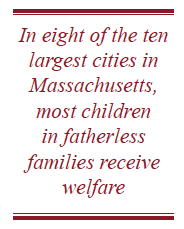 For the state as a whole, 53 percent of children in fatherless families received these welfare benefits. This was nearly five times higher than the rate of welfare receipt for children in married-couple families (11 percent). The rate for all children in the state was 23 percent.60

As detailed previously, children from fatherless homes also have a substantially higher chance of being involved in the criminal justice system. In addition to a myriad of social harms caused by crime, there is a very clear economic price as well. The increased cost to the Massachusetts criminal justice system from fragmented families is estimated to be nearly $275 million annually.59 What these figures show us is that fatherlessness, particularly in communities where the rate of fatherlessness is high, is strongly associated with higher levels of social ills and their corresponding tax burden. 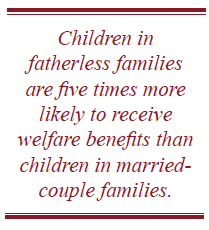