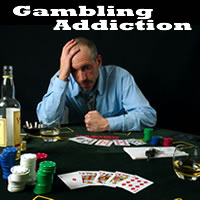 On Monday, the state gambling commission held a forum at North Shore Community College to develop strategies for minimizing the damages caused by problem gambling. The commission heard from gambling addicts, researchers and casino regulators.

According to the Boston Globe, Scott Seely hit a $4,500 jackpot on a slot machine at a Connecticut casino and that is when his addiction started. He ended up gambling away his life savings, ran up his credit cards, and sold off his possessions: an antique car, a motorcycle, a camper. “I ended up in my backyard with a pistol at my head,” he said. Were it not for his reluctance to leave his children without a father, reported the Globe, he would have pulled the trigger.

Seely said that the casino he frequented was aware he was in over his head, yet repeatedly plied him with perks, such as free rooms and event tickets. “They continued to make me comfortable,” he said.

Margery Egan wrote in yesterday’s Boston Herald that at one point during the forum, “an expert from the National Center for Responsible Gambling admitted we don’t know much about addictive gambling–it’s roughly what we knew about drug and alcohol addiction 40 years ago–which is a bad sign.”

How exactly the panel will minimize problem gambling in Massachusetts is still to be decided. The commission discussed the possibility of launching widespread public education campaigns ahead of the opening of any casinos in an attempt to “inoculate” susceptible people before more gambling becomes available. It could also specifically reach out to high-risk groups, such as people who have other addictions.