As MFI’s communications director, I know we are fighting an uphill battle for family values in Massachusetts, and yesterday’s vote in the

MA House to pass the Bathroom Bill was disappointing.  Nevertheless, we have reason to be encouraged.

What you may not have read in the news is that there were hundreds of faithful citizens gathered on Beacon Hill to stand for truth yesterday – HUNDREDS. And they boldly and loudly raised their voices, not only in opposition to this odious bill, but in prayer right in the middle of the State House while the representatives debated the Bathroom Bill.  It was a thrill to be there as hundreds of mothers, fathers and children prayed passionately in diverse languages beseeching God, not only for justice and protection in our laws, but to bring revival and heal this land.

I do not know exactly what heaven will look like, but I do believe that we had a taste of that glory yesterday as people of different cultures and backgrounds united in prayer to the Creator of both male and female (Genesis 1:27). You can see a brief video below. 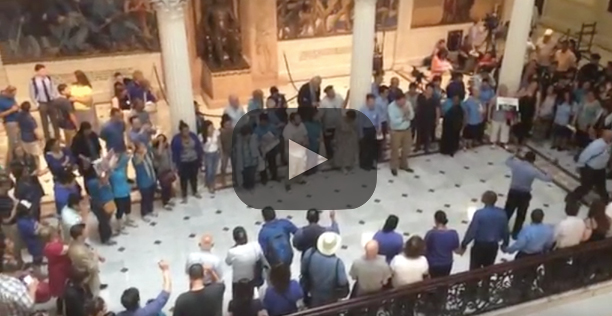 Thank you to all who lifted your voices as one. You were a testimony to everyone who watched in the State House, from passing representatives and legislative aids to the governor’s office and security guards. Keep us in prayer as we now wait for the House version of the bill to be reconciled with the Senate’s version to decide on our next steps.

I leave you with one more verse of encouragement that I recently read while going through the Psalms:

“For the LORD will not forsake his people; he will not abandon his heritage; for justice will return to the righteous, and all the upright in heart will follow it.” -Psalm 94:14&15

People have been continuing to call the governor’s office today. For those of you still unable to get through, you can email him here or try calling him tomorrow between 9 a.m. and 5 p.m.