The six legislators charged with working out the differences between the House and Senate versions of the Transgender Bathroom / Locker room Bill met publically in conference committee today for all of 90 seconds before voting 5 – 1 to kick out the media and hold their negotiations in secret.  (Thank you, Senator Tarr, for your lone vote to keep this open to the public.)  We can only wish they valued our wives’ and daughters‘ privacy as much as they apparently protect their own.  This is another reason why you should call Governor Baker, and tell him to VETO this bill if it reaches his desk. 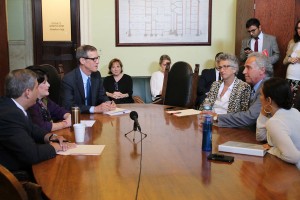 “I expect people to make a commitment to the deliberations to get it done as quickly as possible,” said Rep. John Fernandes, who is leading the conference committee along with Sen. William Brownsberger.

The two bills (S 735, H 4343) have different effective dates, with the Senate bill taking effect immediately after it is signed into law and the House bill carrying a January 2017 implementation date. The House bill also calls on the attorney general to determine how to enforce laws against anyone “who asserts gender identity for an improper purpose.”

“I’m very confident that over the next few hours or few days we’re going to get to where we need to get to,” Brownsberger said.

The committee met for 90 seconds in open session before voting 5-1 to close deliberations to the public. Tarr cast the lone vote against moving to executive session.