We put out the call last week for pro-family supporters to fill the Grand Staircase at the State House in solidarity against the Bathroom Bill… and you DID IT!  More than 160 parents, grandparents and children gathered to call on legislators to protect the safety and privacy of our families. Thank you to all who were able to join us and those who have so faithfully called your legislators over this bill!

Ashley King of Westford and Justin Dobbs of Boston, who are both parents of four children, boldly spoke out in protest of the Bathroom Bill at the press conference. 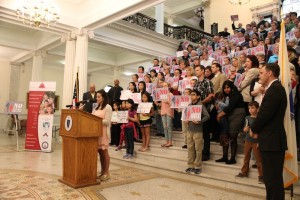 “The most basic human right being violated here is privacy. As a mother of four young children, I will not just stand there and let a boy go in the same bathroom that my daughter just went in.” -Ashley King

Twelve-year-old Summer Stubblebine also made her voice heard about how this bill would affect her and her fellow classmates.

“It doesn’t take rocket science to tell you that boys and girls are different. It’s a common sense right that even a kindergartner could argue for… Bathroom stalls have cracks in them, and I really don’t want a boy peaking in at me while I’m going to the bathroom.” -Summer Stubblebine

Sometimes I am asked about whether we are making a difference with our work on this issue.  Although the internal machinations of our state legislature are typically shrouded in mystery, even for legislators, I can tell you this much – when we sent out our call to action last week, we had been told by multiple reliable sources that the House would be voting on the Bathroom Bill today, but as is now being reported, that vote has been delayed until at least NEXT week.

This is good news because the transgender activists have only until the end of July to pass the bill before the two year legislative session expires.  They would then have to start all over again in 2017.  At this point, every week counts, so THANK YOU for making it clear to the entire House of Representatives that we are watching and will not be silent.

I will be on Life Changing Radio (WVNE-760 AM) at 10:30 a.m. this Saturday to further discuss the Bathroom Bill. Be sure to tune in!