BOSTON – The legislative Joint Committee on Education heard testimony today on two identical bills that are stirring up quite a bit of controversy amongst parents.  Senate Bill 234 and House Bill 2053, both titled, “An act relative to healthy youth,” drew sharp criticism at this morning’s hearing.  Those present expressed strong concern with the bills’ imposition of a new statewide standard for the sensitive topic of K-12 sexual health education.

“These bills take control over sex education out of the hands of local school districts and give it to state bureaucrats,” explained Massachusetts Family Institute’s President Andrew Beckwith.  “Parents, teachers and administrators should be able to decide for themselves what is best for the students in their own community.  Why is the legislature trying to take that right away?” 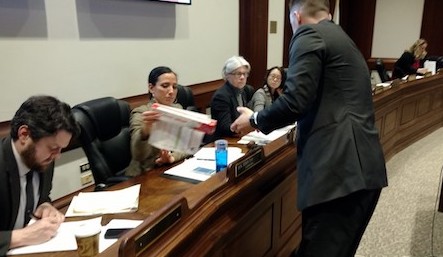 One of the sexual health curricula that is recommended by the MA Department of Elementary and Secondary Education, which would have authority over what schools teach if the bills are passed, is Planned Parenthood’s controversial “Get Real” series.  Parents have been outraged to learn that these middle school workbooks teach children as young as 12 how to use saran wrap as a “dental dam” for oral to anal sexual stimulation.  “The sponsors of this bill argue that it would guarantee sex ed material is ‘age appropriate’ and ‘medically accurate,’” Beckwith observed.  “Clearly, that is not the case when you have activists at the state department of education that think it is ‘age appropriate’ for 12 year-olds to study the finer points of dental dam usage during non-reproductive sexual acts.” During his testimony, Beckwith presented the committee chairs with boxes of Saran Wrap to serve, he said, “as a visual reminder of what these bills would force on our schools and children.”

In 2016, an earlier version of this legislation was passed in the MA Senate before getting stalled in the House.  It was the first time that such a bill had passed in either chamber.  This year’s versions of the bill, however, contain some disturbing new requirements.  For example, SB 234 and HB 2053 would require local schools to teach about abortion as one of the “options for pregnancy.”  Teachers would also be forced to give an “affirmative representation of lesbian, gay, bisexual and transgender individuals, relationships, and families.”  Beckwith doesn’t believe most co-sponsors of the legislation even realize this provision is in the text of the bill.   “When I ask legislators or concerned parents how they would define a ‘bisexual relationship’ as required by these bills, I am usually met with confused looks.  This begs the question, exactly what type of discussion is that going to be for school children, as young as Kindergarten?”