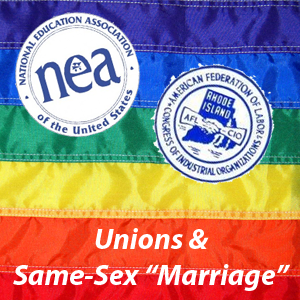 For the first time ever, according to the Providence Journal, the Rhode Island AFL-CIO executive board has voted to endorse legislation that would legalize same-sex “marriage” in the Ocean State. In talking about the decision, RI AFL-CIO President George Nee called the  discussion a “fundamental civil-rights issue.” The organization serves as the umbrella organization for more than 250 local unions and represents more than 80,000 workers in the state.

In recent history, it has been shown that the leadership of unions is far more liberal than the membership that they are charged with leading. While union leadership publicly supported Attorney General Martha Coakley in last year’s US Senate Special Election, exit polls show that the rank-and-file membership split with the leadership and voted for Scott Brown.

Members of labor and teacher unions have publicly criticized their unions for taking a position on same-sex “marriage” and using their dues for lobbying efforts against marriage protection amendments and in support of same-sex “marriage” bills. In California, the fight over Proposition 8 demonstrated this schism. The teacher union itself put $1.25 million into fighting Prop 8, while the teachers, aides and counselors in the California public school systems gave about $2 to support Prop 8 for every $1 they gave to oppose it.

CLICK HERE for more from NPR on Prop 8 funding