Yesterday, MFI President Andrew Beckwith discussed the U.S. Supreme Court’s recent decision on gay marriage with the local media. Monday, the Supreme Court chose to dismiss appeals in five states seeking to keep same-sex marriage bans, a move that gay-“marriage” supporters consider a victory but that MFI believes is evidence that the debate on marriage is still very alive.

As federal courts have attempted to “silence the elected representatives of the people, and the people themselves,” Beckwith said in Tuesday’s Boston Globe, those who support marriage as defined by God have not given up the fight to preserve and defend natural marriage. The media claims that polls are not on the side of pro-natural marriage supporters, but Beckwith said that one recent poll by Pew Research Center shows that gay-marriage support has reached its peak.

“The people have decided the issue,” Beckwith said on NECN’s BroadSide. “Over the past 15 years you’ve had more than 40 million Americans in more than 30 states vote to affirm that the definition is between one man and one woman.”

“The court’s decision ensures that the debate over natural marriage will continue, and we believe that time is not on the side of those who want to redefine natural marriage,” Beckwith told the Boston Globe.

While on NECN last night, Beckwith explained that while the court failed to take this opportunity to uphold its own decision made in the Windsor case, which said that states have the right to define marriage as they see best for the state, its inaction “may signal that they don’t want a Roe v. Wade type decision for marriage which attempts to cut off debate.”

“The debate on marriage is still very much alive,” Beckwith said. “People are beginning to see the consequences to religious liberty and freedom that seem to come on the coat-tales of same-sex marriage.”

Click below to watch Andrew Beckwith on NECN last night. 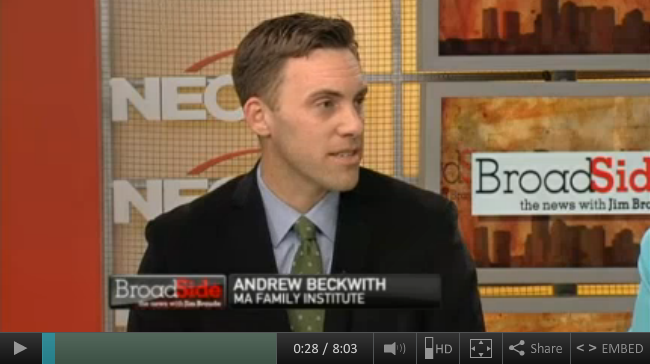 “I hope when [the Supreme Court Justices] get to this decision… they’ll make the right one,” Beckwith told the Globe in today’s front page article.