Yesterday was a significant moment for religious liberty in our country.  For starters, it was the National Day of Prayer, with people of faith praying for our nation and our government from coast to coast.  This included our own State House in Boston, where MFI joined dozens of pastors in covering Beacon Hill in much needed prayer.  At the White House, President Trump issued a proclamation including the following:

“We are also reminded and reaffirm that all human beings have the right, not only to pray and worship according to their 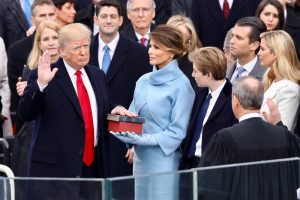 consciences, but to practice their faith in their homes, schools, charities, and businesses in private and in the public square  free from government coercion, discrimination, or persecution.  Religion is not merely an intellectual exercise, but also a practical one that demands action in the world. Even the many prisoners around the world who are persecuted for their faith can pray privately in their cells.  But our Constitution demands more: the freedom to practice one’s faith publicly.”

As one commentator I follow reacted, “I know it’s ‘just a proclamation’, but we haven’t seen anything this strong (and constitutionally correct) in nearly a decade.”  The statement was indeed encouraging, and was timed to coincide with the release of the administration’s much-anticipated executive order (EO) on religious liberty.  Reactions to the EO, however, have certainly been mixed.  David French, Robert George, and Ryan Anderson are not happy at all with it.  I don’t blame them. An initial draft leaked earlier this year was far more comprehensive and specific about protecting people of faith to live and work in conformity with their beliefs.

Yet, while I share their disappointment, I was encouraged by section four of the EO, entitled “Religious Liberty Guidance.”  This is where Trump directed his new Attorney General, Jeff Sessions, to “issue guidance interpreting religious liberty protections in Federal law.”  This is significant.  As we saw with the previous administration’s “Dear Colleague” letters requiring cross-gender bathroom use in our public schools, federal agencies like the Department of Justice can wield enormous power.  I’m hearing that we will have to wait until July to see what that new guidance will be, but I think we might be better off in the long run with it coming from the DOJ rather than directly from the Trump administration in an EO.  If done properly, it should have essentially the same impact, and frankly, I would rather have newly appointed conservative attorneys at the Justice Department both drafting and defending guidelines which we can safely assume will be attacked viciously by the left.  Even the Wall Street Journal acknowledged that “no matter how anodyne a statement, the cultural left will never tolerate assertions of freedom that threaten their increasing intolerance for traditional religious views.”

Sessions is likely better suited to the front lines of that fight than President Trump.  And, as a colleague said yesterday about Trump delegating such contentious LGBT and religious liberty conflicts to Sessions, “Maybe this is really just about Jared and Ivanka having to live in Manhattan for the next 50 years.”  Time will tell.

Our friends at Alliance Defending Freedom are less optimistic, saying “though we appreciate the spirit of today’s gesture, vague instructions to federal agencies simply leaves them wiggle room to ignore that gesture, regardless of the spirit in which it was intended.” My national counterpart at Family Research Council, Tony Perkins, was more bullish on the situation, saying that the EO “sets in place a multi-step process that will provide some long-overdue protections by directing the Attorney General Jeff Sessions to develop guidelines for every federal agency to ensure they protect and promote religious freedom.”Focus on the Family founder Dr. James Dobson was very positive, releasing the following statement yesterday:

“I have been privileged to serve five presidents. I’ve witnessed the ebb and flow of politics in this country for a half century, and I prayed with great anxiety about the future as I watched President Obama move this nation in a direction that defied the Constitution, especially as it relates to Religious Liberty. In all these years, I’ve never found myself more optimistic about the preservation of our Judeo-Christian values as I am today.

“Today’s action must be the first among others because the efforts by previous administrations to marginalize conservative communities of faith were real, thorough and complex. Yet, the combined effect of today’s executive order, legislative actions, and prayer service on the White House lawn are unprecedented. This President and Vice President will go down in history as defenders of religious liberty, and I commend them for it.”

I agree that this represents a good first step towards restoring needed protection for religious freedom and rights of conscience.  But it is only a step.  Those rights were severely undermined in America in recent years.  The previous administration created a climate of hostility towards religion and the right of Americans to freely live out their faith.  Today’s actions represent a start towards reversing this unwarranted government discrimination, and MFI will continue to work for a Massachusetts and an America where religious freedom flourishes and families thrive.