As the fight for religious liberty rages on, be encouraged in knowing that people of faith are standing for truth and morality in the public 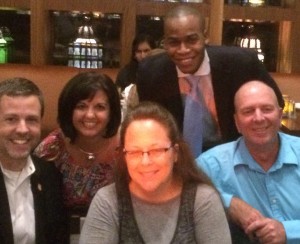 According to the NewBostonPost, Kentucky clerk Kim Davis, who was jailed for refusing to issue same-sex marriage licenses, says she met briefly with the Pope during his visit to the U.S.

“He told me before he left, he said ‘stay strong.’ That was a great encouragement,” Davis said in an interview with ABC.

While in D.C. for the Values Voters Summit, MFI’s Jonathan Alexandre had the privilege of attending a private dinner with Kim Davis, her husband, members of her legal team from Liberty Counsel including Mat Staver, and the Benham brothers. As they walked together through D.C., Jonathan observed that Davis could not walk ten feet without someone stopping her to thank her for standing for religious liberty. Everyone from restaurant owners to police officers have sought out Davis for pictures and words of gratitude. This is apparently the case all around the country as Kim Davis makes appearances nationwide.

Religious freedom may be under attack, but we hope you are encouraged in knowing that you are not alone in this fight. Join us as we stand boldly for our rights as Americans to live and work in accordance with our faith.