As you may have heard, Gordon College is once again in the cross-hairs of LGBT activists.  Sadly, the instigator is one of their own professors, social work faculty member Margaret DeWeese-Boyd.  She claims she was denied promotion because she “vocally and publicly challenged” Gordon’s Biblical prohibition on “homosexual practice.” In fact, she recounts in her complaint filed earlier this month with the Massachusetts Commission Against Discrimination (MCAD) the many ways in which she has sought to undermine Gordon’s Christian sexual ethic.  (You can read the complaint she filed here.)  But given her open and notorious promotion of sexual sin at a Christian school, she has no business remaining employed, let alone promoted.

When I was a student at Gordon, and again as an adjunct professor, I had to sign the life and conduct 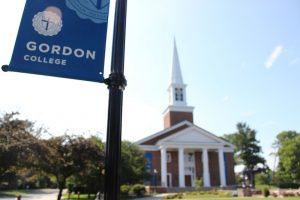 statement, which clearly laid out the school’s policy forbidding, among other things, “sexual relations outside marriage, and homosexual practice…”  We were also taught to exercise “academic freedom within a framework of faith.”  So while some may argue that DeWeese-Boyd’s advocating for a change in the school’s policy should be protected under “academic freedom,” they ignore that what she is pushing for is outside the “framework of faith” that makes Gordon a Christian school.  There are plenty of colleges that would tolerate a liberal social work professor’s undermining of Biblical sexual morality.  As an alumnus, donor, and prospective tuition-paying parent, I am counting on Gordon not to become one of them.

It is significant that DeWeese-Boyd’s lawsuit involves MCAD.  This is the same state bureaucracy that recently threatened to treat churches like “public accommodations,” and subject them to criminal penalties if they failed to allow men into women’s bathrooms under the new transgender rights law.  As a religious organization, Gordon’s human resources decisions should not be subject to MCAD’s jurisdiction any more than your church’s bathrooms are.  But DeWeese-Boyd is inviting them in, and given MCAD’s hostility to and ignorance of religious liberty (see the recent lawsuit MFI successfully helped spearhead defending churches against the commission), it would not be surprising to see them attempt to take advantage of this opportunity.  This is all part of a strategic assault on Christian institutions which have not yet bent the knee to LGBTQIA+ ideology.  (National activists are pressuring Christian colleges across the country on this very issue, and schools in California last year narrowly avoided passage of a law which threatened loss of accreditation if they did not renounce their Biblical understanding of human sexuality.)  Leaders I have spoken with in Christian education and religious liberty law are watching what Gordon is going through, because they know that whatever happens here will have a ripple effect across the country.  I am grateful that the administration and board of trustees has stayed faithful and displayed tremendous grace during these trying times.  Please keep them in your prayers.