This past summer, MFI’s Michael King had the privilege of speaking at Camp Constitution, a local MA ministry 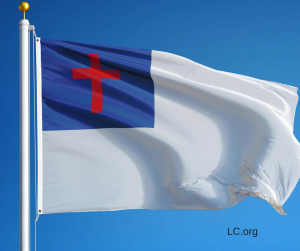 working to enhance the understanding of our Judeo-Christian moral heritage. Last week, we learned that the City of Boston had denied an application by the camp to fly the Christian Flag on the City Hall Plaza flag pole. The camp’s director, Hal Shurtleff, was planning an event at City Hall to “celebrate the contributions of Christianity to American freedom and the rule of law,” highlighting the need for racial reconciliation. He hoped to have the flag raising coincide with short presentations by clergy members from diverse national and ethnic backgrounds and an acknowledgment of Boston’s history as a “city set on a hill.”

Before coming to MFI, I worked in the JFK building on City Hall Plaza and my office overlooked those same flag poles. I can tell you from personal experience that the city of Boston allows the flying of virtually every flag conceivable. My colleagues and I used to compete to see who could be the first to figure out which country or cause the flag represented. Despite this very laissez-faire policy to flag flying, the city has told Hal that they can’t fly a “religious” flag.

I’m happy to say that our friends at Liberty Counsel have sent a demand letter explaining that this is unconstitutional anti-religious discrimination. As they rightly point out, the city has mistakenly focused on a baseless concern with “establishment of religion” when the real legal question at hand in this situation is the government’s duty to not interfere with the “free exercise” of religion. As you can imagine, this may very well turn into a high profile case. We’ll keep you posted.