In the culture, in the courts, even in casual conversation, it is increasingly obvious that we have lost sight of over 200 years of social and legal tradition that has secured our fundamental freedoms—namely, freedom of speech and religion.  A new perspective—that sexual autonomy trumps religious freedom—has begun to impact churches, ministries, and people of faith across this nation.  The freedom of your ministry to remain a compassionate but faithful witness to God’s truth in our world today may depend on a thoughtful consideration of the information in the “Protecting Your Ministry” handbook, designed for all types of churches, faith-based schools, and Christian ministries.

You can download the free PDF handbook by clicking HERE. 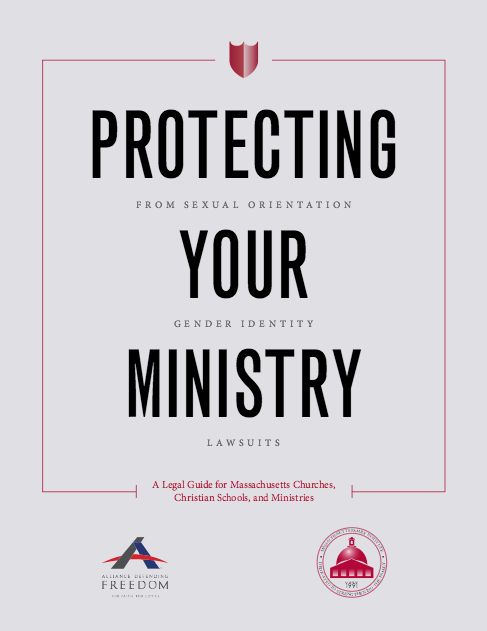 Spaghetti suppers and spirituality don’t mix. At least, that’s what Massachusetts state officials would like to believe. In 2016, the Massachusetts legislature passed a law adding gender identity to the state’s law prohibiting discrimination in places of public accommodation. And even though the law does not specifically mention churches, the Massachusetts human rights commission issued an official guidance document stating that when churches host events open to the public, such as a “spaghetti supper,” they qualify as public accommodations and must comply with the law. The state’s attorney general—the highest law enforcement officer in Massachusetts—also listed houses of worship on her website as unqualified places of public accommodation.  Practically, that meant that Massachusetts churches would be forced to open their locker rooms, showers, and other private areas to members of the opposite sex according to their “gender identity.” It also meant that churches could be in danger of violating the law if they publicly communicated their beliefs about human sexuality.  Watch how one Massachusetts pastor faced this challenge to his church’s ministry.

Ultimately, four Massachusetts churches—Horizon Christian Fellowship, Swansea Abundant Life Assembly of God, House of Destiny Ministries, and Faith Christian Fellowship of Haverhill—decided they could not in good conscience comply with this mandate. These four diverse churches are very involved in serving their communities. The churches host various outreach events, such as giving out Thanksgiving meals to the homeless, ministering to those with alcohol addiction, and handing out school supplies to needy kids.  For them, serving the needy is an important part of demonstrating the Gospel in action and sharing God’s love with their community. But the Bible is also clear on sexuality. And these churches could not compromise their convictions, or the privacy and safety of those in their church.

Even though they faced crippling fines and jail time simply for operating consistently with their faith, these churches knew they could not back down. So, Alliance Defending Freedom filed suit on their behalf. Thankfully, state officials quickly reversed course after the lawsuit was filed and admitted that the First Amendment protects a church’s freedom to operate consistently with its faith, even when engaged in community outreach activities.

The official state gender identity guidance was also revised, and they now recognize the freedom of churches to express views consistent with their faith and operate their facilities in a manner that doesn’t violate their religious beliefs. On December 12, 2016, the four Massachusetts churches and their pastors voluntarily dismissed their lawsuit.  And now, these Massachusetts churches are free to continue living out their faith in their communities, serving their neighbors, and serving up hot meals. The pastors celebrated their win with a spaghetti supper.