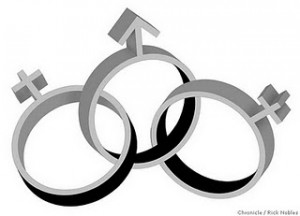 During our long battle to pass the Marriage Amendment, anytime someone mentioned polygamy in the same sentence as same-sex “marriage” our opponents would scream that there was no link between the two, and that they simply wanted so-called “marriage equality.”

Well, we are now there! Same-sex “marriage” is legal in six states, sodomy has been ruled constitutional by the U.S. Supreme Court, and guess what, both are being used as a basis for a lawsuit to legalize polygamy in Utah. As the Los Angeles Times reports, Jonathan Turley, a George Washington University law professor, is challenging the constitutionality of Utah’s anti-polygamy laws based on the 2003 Supreme Court case Lawrence v. Texas that overturned laws against same-sex sodomy. (The SJC cited the same case in their ruling legalizing same-sex "marriage" in Massachusetts.)

“That’s not good news in the view of most gay rights supporters,” writes the Times’ editors, “who don’t want their cause linked to that of polygamists any more than they want to see parallels drawn with people who engage in incest, bestiality and other taboo sexual practices.”

My colleague in Washington State, Joe Backholm, executive director of the Family Policy Institute of Washington, wrote about this case this week:

“[Same-sex marriage advocates] would rather ignore a discussion about legal and social precedent [in regards to polygamy] and focus on the fact that most gay people are decent people and good neighbors. As true as that may be, it is a hollow foundation on which to build public policy.”

Same-sex “marriage” advocates, emboldened by their victory in New York, are moving to push for legalization in other states. They hope to capitalize on the weak religious exemptions in the New York law by attaching them to bills in other states in hopes of winning passage. These protections for faith-based groups are nothing but window dressing, and will not withstand the tests of time. However, same-sex “marriage” will still be there, as will the precedent it has set for other sexual minorities seeking recognition.

While our opponents are not happy with the polygamy lawsuit making headlines, it is not enough for us to say “we told you so.” We must continue to reference the Pandora’s Box that same-sex “marriage” opens, and point out that polygamy is only one piece of it. Furthermore, we must continue to disprove the disingenuous claims by those in the “gay rights” movement that theirs is part and parcel to that of the civil rights movement of 50 years ago.