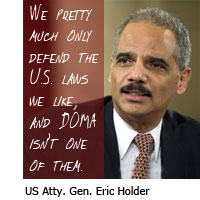 From our friends at the Family Research Council:

Speaking of charades, the Pentagon’s comprehensive “Don’t Ask, Don’t Tell” study seems to be full of them. Back in 2010, one of the conditions for repeal was that the Defense Department would continue to view its benefits policy through the lens of the federal Defense of Marriage Act (DOMA), meaning that traditional spouses would be the only ones eligible for military benefits. Now, two years later, things have changed. A group of gay and lesbian soldiers are suing to bring taxpayer perks to their same-sex partners, and there is little evidence that the administration will do anything to stop them.

Last month, we explained that U.S. Attorney General Eric Holder refused to take the case, leaving the defense of DOMA–and the military’s longstanding policy–up in the air. By abandoning DOMA, Holder is essentially putting the administration at odds with itself–with the Defense and Justice Departments forced to take opposing sides in court. Already, Holder’s actions have been a great betrayal to the hundreds of thousands of service members and their leaders, who were all assured that “Given current law, particularly the Defense of Marriage Act, there are a number of those benefits that cannot legally be extended to gay and lesbian Service members and their same-sex partners, even if they are lawfully married in a state that permits same-sex marriage.” The Pentagon’s comprehensive review could not have been more clear, “[F]or benefits in this first category, we simply cannot recommend that the Department of Defense extend them to same-sex couples, because it would be legally impermissible to do so.”

Unfortunately, this is all part of the great DADT bait and switch. Whether it’s the push for same-sex military “weddings” or homosexual partner perks, people are learning the hard way that everything the Obama administration vowed it would not do, it’s doing. Don’t miss what FRC’s Bob Maginnis had to say about the controversy in today’s Washington Times.