“Kris Mineau and Mary Bonauto were enemies—metaphorically speaking—when they first met in the wood-paneled lobby of the Massachusetts attorney general’s office in September 2005.

Bonauto, a star lawyer at the Boston-based Gay & Lesbian Advocates & Defenders, or GLAD, had two years earlier won a landmark case making Massachusetts the first gay marriage state. Now she was trying to stop Mineau, who was president of the Massachusetts Family Institute, from launching a voter petition drive to define marriage as between a man and woman in the state constitution. Both had arrived at the lobby to hear whether the attorney general would allow the petition to proceed.”

Ed Lambert in the Morning

“Protect everyone’s rights to religious freedom, privacy and safety, and there’s other ways of doing that than forcing this sort of radical agenda into our bathrooms and locker rooms.” –MFI’s Andrew Beckwith

“Andrew Beckwith, president of the conservative Massachusetts Family Institute, said a public accommodations law would give a transgender person access to sex-segregated areas like bathrooms and locker rooms. He pointed to a 2010 case when a transgender woman, who was born a man, was arrested for refusing to leave a women’s bathroom in a Boston shelter. The woman sued the city, which has its own transgender public accommodations law, and Boston paid $20,000 in a settlement, according to the Boston Globe.

‘That’s what the public accommodations bill would do statewide,’ Beckwith said. ‘That confirms for us the concern we have that this would violate privacy and safety of all citizens, particularly women and children.'”

“Andrew Beckwith of the Massachusetts Family Institute and Massachusetts Democratic Party Chair Matt Fenlon weigh in on the 2016 winners and losers in the Indiana showdown over religious freedom and gay rights.” 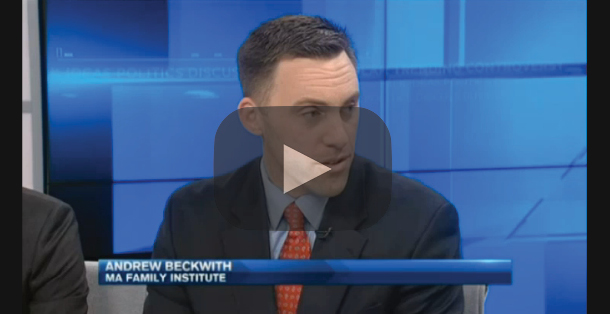 “‘If Gordon College is bullied into changing its behavioral policy, every faith-based school in New England – Catholic, Protestant or otherwise – will be at risk for the same treatment,’ the Massachusetts Family Institute warns.”

Massachusetts: The Best State for Children?

“When states of the U.S. are compared on indicators of child wellbeing, the Commonwealth of Massachusetts usually does well. In the 2014 Kids Count Data Book from the Annie E. Casey Foundation, for example, Massachusetts is number one in the overall ranking of the 50 states. But another recent report, entitled Fatherlessness in Massachusetts: The Economic and Social Costs to Our Commonwealth, finds sizable disparities in the state, not just in family wealth and incomes, but in child wellbeing. The report from the Massachusetts Family Institute links the problems of the many children who are not doing well to the growth of single-parent households and to sizable variations in the prevalence of family disruption and non-formation across areas of the state.”