One of the direct consequences of the breakdown of traditional sexual mores is the growing abandonment of marriage.  Now more than ever, marriage has become less of a priority among the next 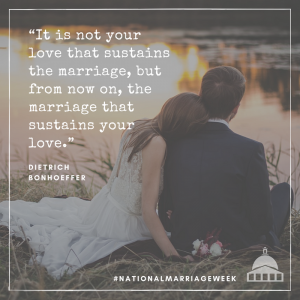 generation. Instead, young people are turning to cohabitation or open relationships in attempt to satisfy their need for relationship (without the work of commitment). So, how do we help marriages flourish in a society that discourages young people from getting married and often demonizes the institution all together? We can start by educating them on the facts.

Wednesday began National Marriage Week, the annual celebration of marriage and the perfect occasion to discuss why marriage matters and how it impacts society, particularly our children. According to Institute for Family Studies (IFS), cohabitation creates instability for children. In fact, when it comes to a child’s well-being, “cohabitation unions more closely resemble single motherhood than marriage,” another IFS article says.

“For children, the differences between cohabiting and married parents extend far beyond the lack of a marriage license. Compared to children of married parents, those with cohabiting parents are more likely to experience the breakup of their families, be exposed to ‘complex’ family forms, live in poverty, suffer abuse, and have negative psychological and educational outcomes.”

Children need a married mother and a father. Marriage (or lack thereof) doesn’t just impact the individuals but also affects children and families. As God designed it to be, marriage is good, and the influence it has on society as a whole are a reflection of that.

All week on Facebook, Twitter and Instagram (we are new to Instagram, please follow us at @MAFamilyInst!), we have been sharing media that discusses the importance of marriage as well as useful resources to help couples keep their marriages healthy and holy.