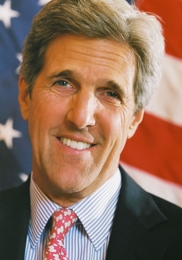 Former presidential candidate and senior U.S. Senator for Massachusetts, John Kerry, has made it official that he now support same-sex “marriage.” While running for president in 2004, Kerry said that he opposed same-sex “marriage,” choosing instead to support civil unions.

Kerry, a Roman Catholic, penned an op-ed earlier this month for the Boston Globe defending President Obama’s changing view on the same issue. “Last March, when the Boston Globe asked if I support marriage quality, I said ‘yes,’” Kerry wrote. “But in light of the increased discussion after passage of New York’s (gay marriage) law, more is required than a simple ‘yes.’ We cannot afford to be imprisoned by politics that say your views are not allowed to grow as you gain knowledge and experience.”

President Obama maintains that he doesn’t support same-sex “marriage,” but has publicly called for the repeal of the federal Defense of Marriage Act (DOMA). Sen. Kerry voted against the 1996 law that was approved by bi-partisan majorities in both houses of Congress and signed into law by President Clinton.

Our state’s other U.S. Senator, Scott Brown, has steadfastly opposed same-sex “marriage” and pledged during last year’s Senate campaign to oppose the repeal of the Defense of Marriage Act (DOMA). If you haven’t emailed Senator Brown on DOMA, please CLICK HERE to send him an email.