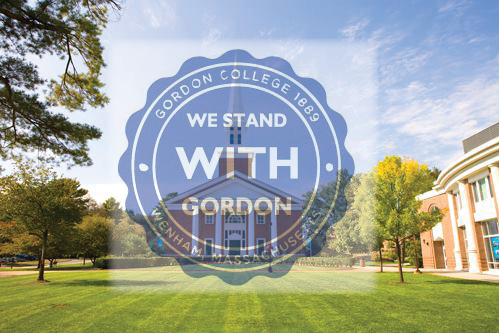 As Gordon College students headed back to class last week, they were faced with news of yet another ideological assault on their school. The Lynn Public School Committee, by a vote of 4 to 3, decided to sever its decade old relationship with Gordon. In particular, it appears that Gordon students will no longer be allowed to volunteer as student teachers in the Lynn school system. This is a tragedy, not only for the college’s students who are seeking to take on the critical and challenging role of teacher, but also for the children of Lynn.

I can tell you that many of the Gordon students with whom I’ve interacted have a real heart for ministering to youth, particularly in our cities. It is also a real loss for the schools of Lynn, as the

Gordon College Education Department has long been highly regarded for the teachers it graduates. A generation ago, my mother was hired by a local middle school as a new Gordon grad. The principal asked her if any of her classmates would be interested in applying as well because the administration was really impressed with the Gordon graduates they had hired. Even a generation ago, Gordon was known for producing excellent teachers.

So what happens to those new Gordon education grads now? Is not the logical conclusion of a policy that discriminates against Gordon students, as Lynn is now doing, to discriminate against graduates of the school as well? The letter that President Lindsay signed, which Lynn school officials apparently find so offensive, was designed to allow for the continuation of policies like Gordon’s Life and Conduct statement, which is signed by Gordon students. In that policy, students and faculty affirm that, “Certain actions are expressly prohibited in Scripture and are, therefore, wrong.” This would to apply to behaviors Gordon prohibits for its community, such as, “words and actions which are expressly forbidden in Scripture, including but not limited to blasphemy, profanity, dishonesty, theft, drunkenness, sexual relations outside marriage, and homosexual practice.” Therefore, arguably, any student or recent graduate of Gordon has signed a statement that could be viewed as offensive to the current sexual ideology of our culture as the letter signed by President Lindsay. Will all Gordon grads therefore also be barred from teaching in Lynn?

Some had proposed that students should sign ‘nondiscrimination’ statements or be subjected to “LGBT Cultural Competency training” before being allowed to student-teach in Lynn. However, even forcing Gordon students to deny their sincerely held religious beliefs on the meaning and morality of sexuality was not enough to appease the LGBTQ agenda.

Let me be clear, what the Lynn School Committee has done, as has the Mayor of Salem, is to discriminate against the students of Gordon College based on their religion. Sadly, they are even doing so at the peril of their own students, who received no-cost, valuable service from capable, compassionate student-teachers. This decision does not serve the students of Lynn.

However, some would argue that this is only ‘fair’ since Gordon is allegedly ‘discriminating’ against practicing homosexuals. There are major flaws with such an argument. First, expecting all members of the school to voluntarily behave in accordance with an agreed upon standard of conduct is not, and cannot be, discrimination. Members of the Gordon community are not required to change their desires, but they are held accountable for their behavior. I personally know a student at the school who publically blogged about having same-sex desires, but chose to not be sexually active while at Gordon. She’ll be in good company, as the overwhelming majority of the student body is unmarried and will therefore be subject to precisely the same behavioral requirements themselves.

Second, Gordon is not on a level playing field with the City of Salem or the Lynn Public School system. The latter two are public governmental entities. The First Amendment of our Constitution protects Gordon, a private, faith-based organization, from the coercive power of the state. No one is forced to attend Gordon College or agree with its theology, and the school has the Constitutional right to set its own parameters for association. It is our government that may not discriminate on the basis of religion, and yet that is precisely what Salem and now Lynn have done. Local governmental entities must not overstep their Constitutional boundaries in an attempt to silence and intimidate those with whom they disagree. People of all faiths should clearly denounce these violations of our religious liberty.