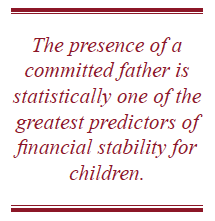 “The truth is, the greatest tool to lift children and families from poverty is one that decreases the probability of child poverty by 82%. But it isn’t a government spending program. It’s called marriage.”
– Marco Rubio, United States Senator for Florida.
“Reclaiming The Land of Opportunity: Conservative Reforms for
Combatting Poverty”. N.p., 8 Jan. 2014. Web. 29 Sept. 2014.

“Child poverty is an ongoing national concern, but few are aware of its principal cause: the absence of married fathers in the home.”
– Robert Rector, “Marriage: America’s Greatest Weapon Against
Child Poverty,” The Heritage Foundation, Special Report No. 117
September 5, 2012 p. 1.

“Nonmarital childbearing is one of the preeminent reasons this nation, despite spending about $1 trillion a year on programs for disadvantaged families, is struggling to reduce poverty and increase economic mobility.”
–  Ron Haskins, “The Crisis of Nonmarital Childbearing,” The
Heritage Foundation 2014 Index of Culture and Opportunity, p. 45. 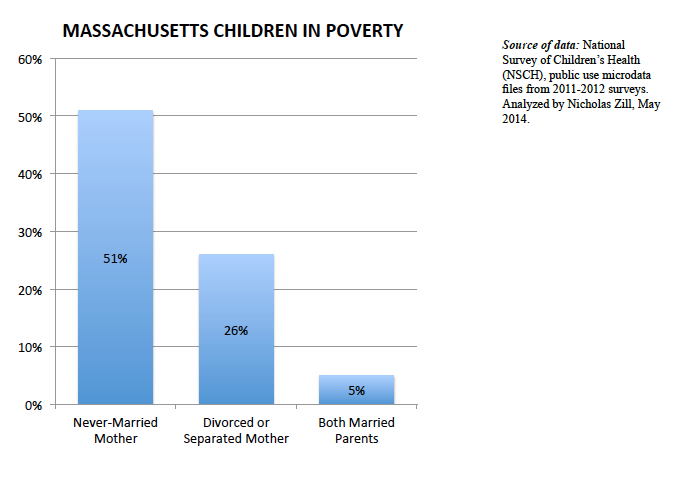 The importance of a father to the economic well-being of children cannot be overemphasized. Statistically one of the 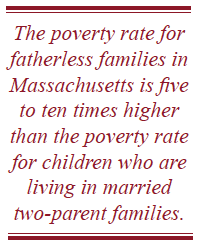 greatest predictors of financial stability for children is the presence of a committed father. This is dramatically illustrated by the increased threat of poverty where a father is absent.  Nationally, nearly half of all homes where a married father is not
present are in poverty.15  In 2015, the poverty rate for fatherless homes was more than twice the average for all families in America and over four times the rate of poverty for children living with a married mother and father.16

In Massachusetts, the economic disparity between married mother-father homes and fatherless households is even greater. For example, the poverty rate for fatherless families in the Commonwealth is five to ten times higher than the poverty rate for children who are living in married two-parent families, with both their birth parents or two adoptive parents.17 The poverty rate for children when both mother and father are present is 5 percent. In contrast, 26 percent of Massachusetts children living with divorced or separated mothers, and 51 percent of those living with never-married mothers, are in 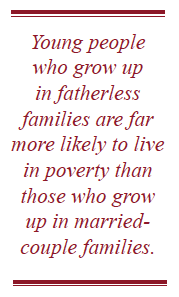 families whose income is below the official poverty line.18

These statistics are even more unsettling when we look at the real dollar value of what it means to be “in poverty.” Thefederal poverty threshold in 2017 for a mother and one child was $16,240. For a mother and two children, it was $20,420.19 Children in mother-father families, however, are significantly less vulnerable to falling below the poverty level. In fact, they are statistically less likely to get anywhere near it. A clear majority, 60 percent, of Massachusetts children in intact, two-parent families are in what is termed a “financially-secure household,” whose annual income is at least 400 percent of the official poverty level.20

There has been much concern and discussion in recent years about the problem of “rising income inequality.” Many lament what is seen as a growing gulf between the super-rich and the working poor. Sadly, a critical factor in this discussion is often overlooked; that is, that the increase in fatherless families is a significant contributor to income inequality. In the Commonwealth, for example, the median family income for married-couple households with children in 2017 was $127,047. For female-headed households with children, it was less than a quarter as much, $30,203.21 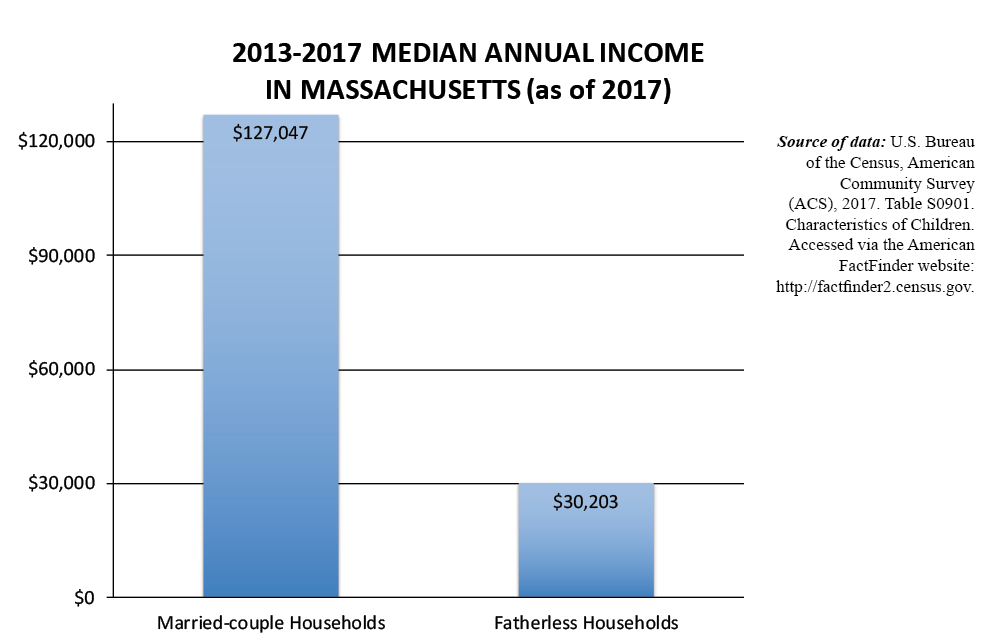 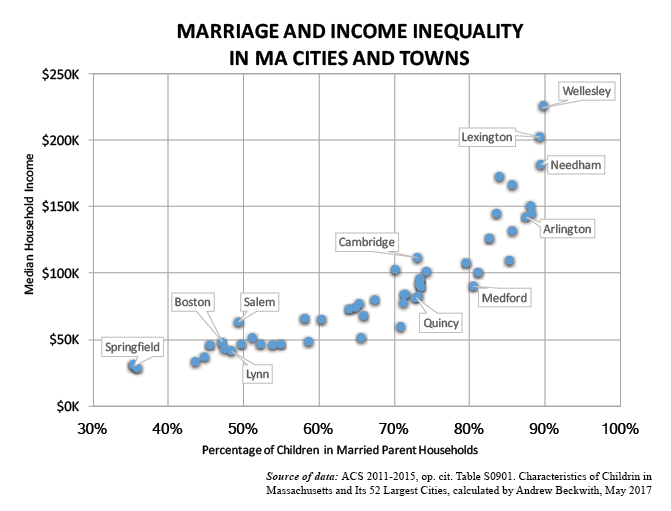 A survey of the 52 largest cities and towns in the Commonwealth demonstrate a similar strong correlation between marriage and income. The chart above illustrates the dramatic rise in a community’s median household income as the percentage of children who live with married parents increases.

For example, in Lexington where nearly 90% of children live with both their mother and father, the median annual income is $202,174. Barely a third of children in Springfield, on the other hand, live with both parents and the median income for their city is at rock bottom – just over $30,000 per year.23

What we see in between is that there is a steady increase in income the more a community’s families are headed by a married team of mother and father. Once a community has approximately four out of five children living in homes with both parents, the average household income skyrockets.

While statistics and social science data cannot predict the impact of fatherlessness for every child, they do show us where it hits the hardest. The burden of fatherlessness is disproportionately borne by the children of our urban communities. In four of the 10 largest cities in Massachusetts – Springfield, Fall River, Worcester, and New Bedford – majorities of children in fatherless families were poor during the 2011-2015 time period. In four additional cities – Lowell, Lynn, Boston, and Brockton – child poverty rates in fatherless families were 45 percent or greater.24 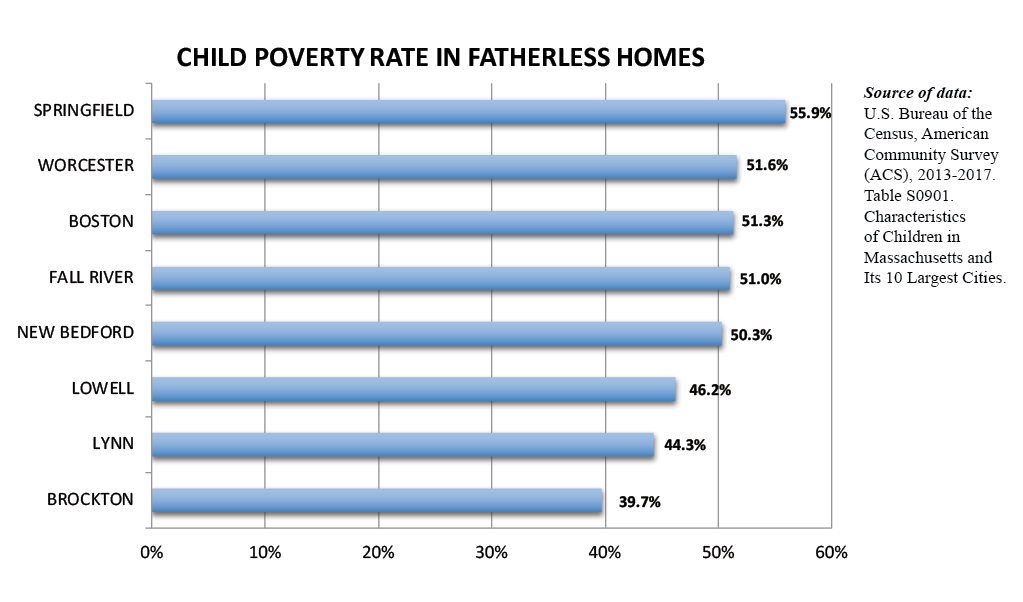 There are a number of reasons why single-parent families, particularly those without fathers, are more likely
to be poorer than their mother-father counterparts:

As the above figures demonstrate, the economic plight of never-married mothers is consistently and substantially greater than that of divorced or separated mothers. This evidences a residual economic benefit of marriage, even after the upheaval of divorce, as those children who start out with no father fare significantly worse than those who at least begin with the advantage of married parents. Some of this disparity no doubt stems from greater child support payments from divorced fathers.  However, this is still a poor financial substitute for having a father in the house.

This leads us to conclude that, in America, the primary cause of income inequality is the structure and health of the family.   Young people who grow up in fatherless homes are simply far more likely to live in poverty than those with a married father and mother living together.  This is true despite the heroic efforts of single mothers, and we do not mean to disparage in any way the sacrifice and exhausting work of raising children alone. Instead, we should work to minimize the number who must do so. As a society, we can no longer ignore the reality that marriage is the fault line between the middle class and the poor.