Over the past 50 years, the family in America has changed dramatically. Of all the changes, perhaps the most significant is the increasing absence of the father from the home. At the end of the 1950’s – before the social revolution took root – the percentage of children born out of wedlock in America was approximately 5 percent.3 In 2015, that percentage had grown to over 40 percent.4

This along with increased rates of divorce has contributed to the fact that 25 million children in America, one out of every three, now live in homes without both biological parents. For the overwhelming majority of these children, this means specifically growing up without a father.5 This is a sea change in American culture.

More than being simply another discouraging national statistic, this problem of fatherlessness is a growing challenge to the children of our Commonwealth.

Forty-five years ago, as late as 1970, nearly all children born in Massachusetts went home from the hospital with a married mother and father.6 By the end of the century, just 30 years later, fewer than three quarters of all children were born to a married mother.7 In the first decade and a half of the 21st century, the percentage of out-of-wedlock births in Massachusetts has continued to grow dramatically. Today more than one third (34 percent) of the children born in our Commonwealth enter the world without a married mother and father.8 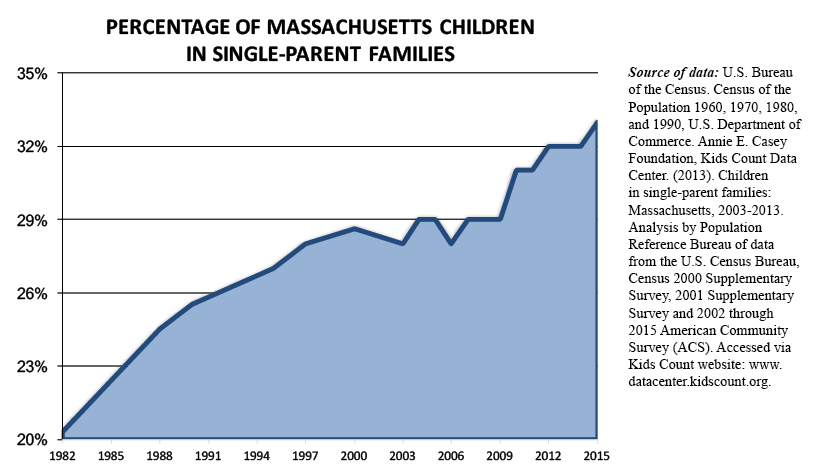 This has led, not surprisingly, to a concurrent increase in the number of children who spend their formative years in homes without a father. In the past 45 years, the percentage of children growing up in single-parent families in Massachusetts has increased from less than 10 percent9 to well over 30 percent.10  This means that a third (almost 440,000) of our children are growing up without the benefit of both a mother and a father in their home. The overwhelming majority of these children, over 80 percent, are not living with their biological father.11

As the chart below shows, the epidemic of fatherlessness is hitting the children of Massachusetts cities especially hard. In six of the largest urban areas in our Commonwealth, over half of all children are being raised by a single parent. 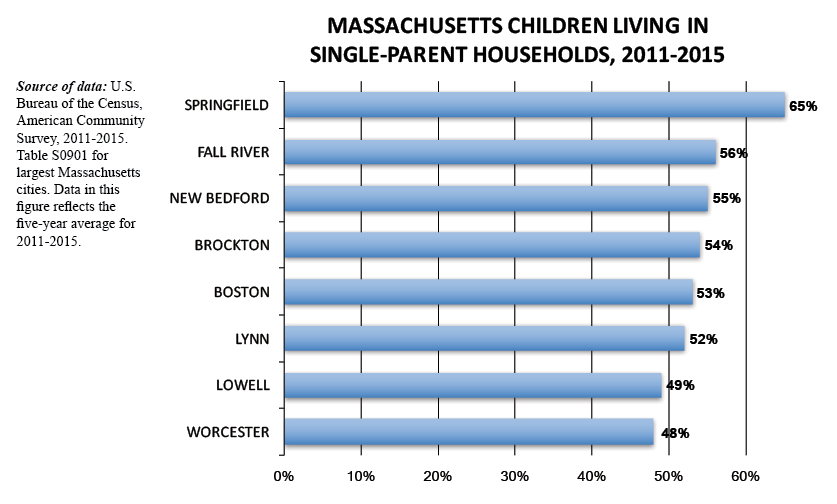 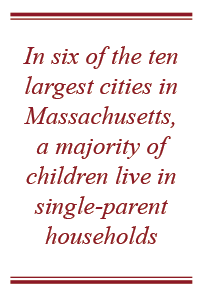 It is hard to believe that 53 percent of all children in our capital city of Boston have to grow up without the benefit of having both a mother and a father in the home.  Sadly, the children of  Boston are not alone in this dilemma. What does this mean for our communities? For our Commonwealth?

This report first lays out the facts about fatherlessness in Massachusetts. It also delineates the economic as well as the social costs of fatherlessness, showing that fatherlessness in the great majority of cases leads to poverty and often intergenerational poverty. It is a major cause of the high school drop-out rate. Due to the lack of education and absence of job skills, many of these children who fail to finish high school are condemned to a life of poverty-level income, job insecurity, and welfare dependency. Fatherlessness also leads to higher crime rates and higher out-of-wedlock teen birth rates, reinforcing this cycle of broken families.

In brief, fatherlessness is a tragedy for the child, a disaster for the family, a blight on the community, and a catastrophe for 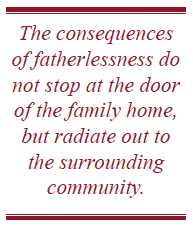 the Commonwealth and the country! The consequences of fatherlessness do not stop at the door of the family home, but radiate out to the surrounding community and civic body in the form of increased crime and a ballooning economic burden of welfare costs. Fatherlessness affects us all, and leaders in our government, our churches, academia, and the professions should unite to make it a high priority to bring fathers home. 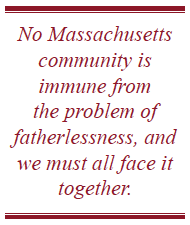 The problem of family decline is also not limited to any one geographic area. It is evident in rural as well as urban areas of the Commonwealth. In Western Massachusetts, encompassing Berkshire, Franklin, and Hampshire counties, fewer than half of today’s teenagers – 46 percent – have grown up living with both married parents throughout their childhood. In the urban neighborhoods of South Boston and adjacent areas of Suffolk County, only about a quarter of teenagers – 28 percent – have been raised by both married parents. Even in the Boston suburbs of Norfolk and Middlesex counties, with their well-educated and affluent populations, the proportion of teens who have grown up with both parents does not exceed 70 percent.13

The increase in fatherless families means that growing numbers of young people will reach adulthood ill-equipped to become self-supporting wage earners and taxpayers, and active, informed citizens. A single-parent upbringing puts a child at greater risk of academic underachievement, youthful idleness, teen parenthood, and adult criminality. No Massachusetts community is immune from the problem of fatherlessness, and we must all face it together.