The “Counseling Ban” is on the move in the Massachusetts legislature.  Lawmakers are attempting to pass a bill that would make it illegal for mental health 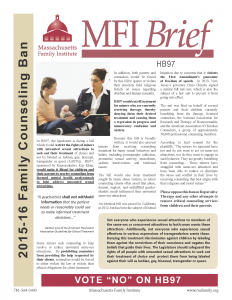 professionals to counsel and talk with children who are struggling with unwanted same-sex attraction. The proponents of this bill have couched this Counseling Ban as necessary to end “abusive practices” such as electroshock therapy and waterboarding. However, as we have shown, the actual language of the bill prohibits any treatment, including basic talk therapy.  It is in effect a restraint on free speech.  The unfounded and frankly ridiculous comparisons by the bill’s proponents between helping someone address unwanted sexual feelings and these absurd practices are just the latest example of the scare tactics employed by the LGBT agenda.

In July, MFI and representatives of the national family policy network spoke out in opposition to the Counseling Ban bill at a public hearing on Beacon Hill. Since then, this legislation has bounced from committee to committee. It now lies in the House Steering Committee. Although the bill is on the same path as it was during the 2013-2014 legislative session, when we were able to defeat it, it nevertheless drew favorable votes from both the Committee on Children and Families and the Healthcare Financing Committee.  Fortunately, pro-family legislators are able to prevent the bill from coming to a vote until next year.

However, the timing on this movement is concerning, as just this week I learned from my counterpart in Ohio that a city-wide version of this law was adopted by Cincinnati. As we have seen with the Bathroom Bill, when activists aren’t able to get state-wide legislation passed, they often turn to cities to build momentum.  In fact, activists right here in Quincy, MA were planning to quietly push through a city-wide Bathroom Bill ata council meeting scheduled for December 21st.  I am happy to tell you that yesterday the sponsor of that proposed ordinance withdrew the bill after pro-family supporters in Quincy made it clear there would be a fight.

During these waning days of 2015, please be vigilant in your own communities.  If you hear of Bathroom Bills or Counseling Bans being proposed in your cities or towns, let MFI know so we can spread the alarm and come alongside you to fight for our shared values.