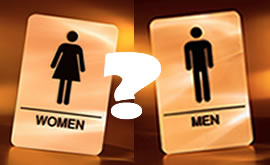 The American Psychiatric Association (APA), saying that “all psychiatric diagnoses occur within a cultural context,” has removed “gender identity disorder” from its Diagnostic and Statistical Manual of Mental Disorders (DSM). In its place, the APA will now diagnose these people as being afflicted with “gender dysphoria,” or so-called emotional stress related to gender identity. This is a disturbing, but not wholly unexpected change.

How long until a “cultural context” is cited by liberal social engineers to rewrite other definitions of disorders such as pedophilia? The group B4U-ACT is already lobbying the APA to change their treatment of pedophiles, who they refer to as “minor-attracted people,” citing the “stigma” leveled against this group of people because of its negative listing in the DSM. This dangerous precedent began in 1973 when homosexuality was removed from the DSM due to the successful lobbying efforts of the homosexual community. And so no one is led to believe this is the end of the road, mental health professionals who work with “transgender” clients are pushing for a revised list of symptoms, so that a diagnosis will not apply to people whose distress comes from external prejudice, adults who have transitioned, or children who simply do not meet gender stereotypes.