Nearly half of all marriages end in divorce.

Even for children born into a home with a married mother and father, divorce 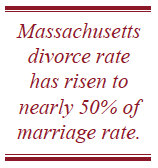 appears to be an increasingly common hazard. During the first half of the 20th century, the U.S. divorce rate, defined as the number of divorces per 1,000 married women aged 15 and over, was less than one marriage in five.  The rate then began to rise sharply starting in the early 1960s. By the end of the 1970s, the national rate had more than doubled. It peaked in 1979 and then declined somewhat, but has since remained well above the levels of the 1960s.68 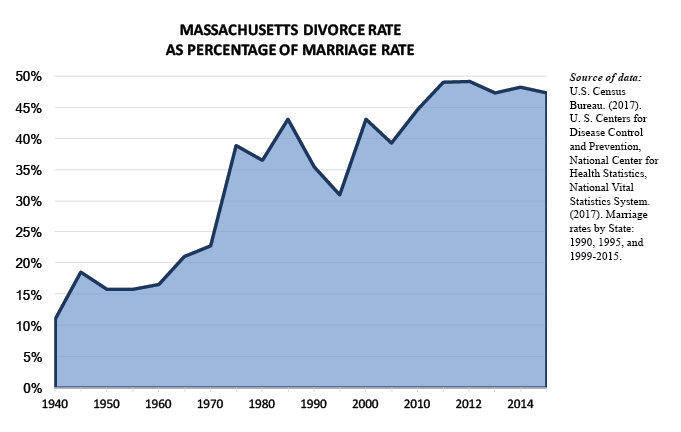 In Massachusetts divorce trends have followed a similar pattern over the last half-century, though divorce rates were lower in the Commonwealth than in the nation as a whole, and peaked later, in the mid-1980s.  Between 1980 and 2011, the annual number of divorces in Massachusetts declined by 24 percent, from almost 18,000 to less 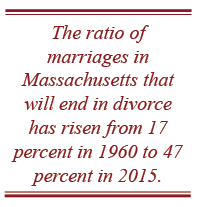 than 13,000 per year. Because the annual numbr of marriages also declined over that period, the ratio of divorces to marriages did not decline but fluctuated between a low of 35 percent and a high of 50 percent.69

Many of the married couples that break up have had children who must go through the painful experience of having their parents fight, separate, and become divorced. Children in Massachusetts today are three times more at risk of this than children two generations ago.