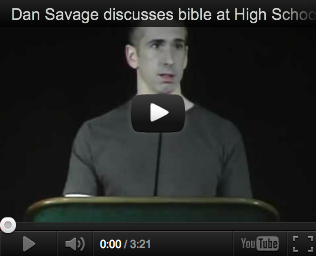 Fanatical homosexual activist Dan Savage is the news again. Savage has never let any boundary stop him from promoting his radical agenda, not even assault.

When I ran for the Republican presidential nomination, Savage wormed his way into my Iowa campaign headquarters and knowingly tried to infect me, my campaign staff and volunteers with the flu by licking glasses, door knobs and office equipment. Then he had the audacity to write about it. As a result of incriminating himself, he was charged with voter fraud and sentenced to community service.

Was this just a youthful indiscretion? No. For one, Savage was 35 when he infiltrated my campaign. The Journalism Education Association and the National Scholastic Press Association recently invited Savage to address the National High School Journalism Conference. They should have known better. Savage may be welcome at the Obama White House, but a cursory review [WARNING: EXPLICIT LANGUAGE] would have turned up enough to know this man is not an appropriate speaker for most public audiences.

His speech to aspiring young journalists quickly devolved into a savage attack on the Bible. The man who is supposedly dedicated to teaching tolerance was, true to form, incredibly intolerant of Judeo-Christian values and anyone who believes in them.

About 100 students had the courage to get up and walk out of Savage’s profanity-laced bigoted rant. But Savage was just getting warmed up. The anti-bullying crusader bullied the students who left, calling them “pansy a–ed.”

Unbelievably, the Journalism Education Association and the National Scholastic Press Association have not apologized for Savage’s offensive speech or for inviting him to speak. But what if Savage had said similar things about Muslims or the Koran? Not only would the audience likely have booed him, but these “journalistic” organizations would be under incredible pressure fr