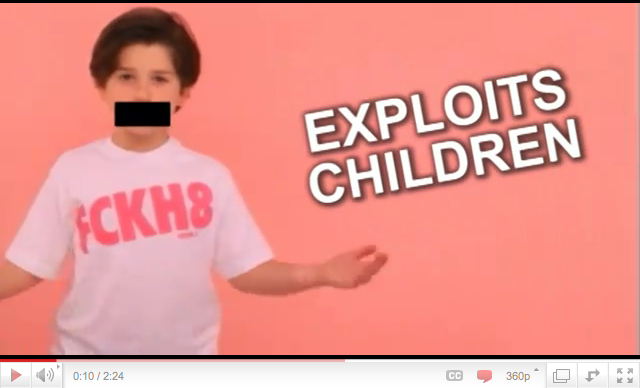 Last year, radical activists released an angry and degrading video to garner publicity and raise money for same-sex “marriage” advocacy. More than 2 million people have already watched this 2-minute video that is laced with dozes of angry obscenities. Some curse words are even spoken by 8 and 10-year-olds, exploiting these young children for cheap shock value.

National Organization for Marriage (NOM) has called on the nation’s largest same-sex “marriage” groups who are benefiting from this video to reject this and similar ads produced by a handful of radical activists. Included in these groups are the Courage Campaign, Lambda Legal, Equality California, and the American Foundation for Equal Rights.

“We call on them to reject all funding from this obscene campaign, and to demand an immediate end to this angry and hateful efforts that is degrading our conversation and exploiting young children,” said Brian Brown, president of NOM. NOM has produced a YouTube video that gives you the gist of the video’s content, and you can view their video HERE.

To get the full impact of this offensive video, you would have to watch it yourself. However, I cannot bring myself to encourage you to watch it, but you can find it by visiting www.youtube.com and searching for FCKH8. May God have mercy on those who would cause one of these little ones to stumble (Matthew 18:6).