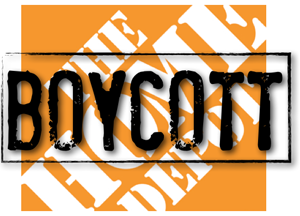 “We have never changed out commitment to diversity and including of all people, and we have no intention of doing so. Nor have we changed our apron policy or the guidelines for our charitable giving.”

The Home Depot’s online policy states it will not sponsor “…festivals, dinners…fundraisers…,” yet it sponsors gay pride festivals and Human Rights Campaign fundraising dinner events. Home Depot’s official spokesperson told AFA that employees are not allowed to wear their orange aprons outside its stores. But according to gay supporter Jordan Humphrey of Illinois, in the first week of 2012, “over 30 orange aprons showed up in Champaign’s new-year’s pride-fest.”

MFI encourages all our supporters to continue boycotting The Home Depot for their home improvement needs. Click Here to download a PDF that you can duplicate and distribute to your circle of friends.