Just in time for Saint Patrick’s Day, ABC/Disney launched a new show this week that ridicules and demeans American Catholics, their churches and their families.  The Real O’Neals series premier Tuesday night was described by a New York Post TV critic as “a witless collection of offensive anti-Catholic clichés.”  An article this week in the New Boston Post explains that the sitcom is “based on the teenage years of hatemongering columnist Dan Savage” that is a “religion-bashing extravaganza.”  In case you’re not familiar with Mr. Savage, he is one of the most vocal and vulgar homosexual 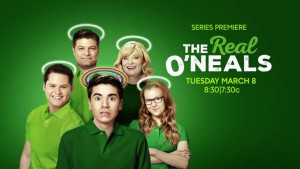 activists in the country.  You can watch him in action lecturing public high school students that they should “ignore B.S. in the Bible” here. We can only hope that viewers will vote with their remote controls and that this show will be short-lived.

Speaking of Saint Patrick’s Day, the time honored tradition of the Allied War Veteran’s South Boston Parade will, for the second year in a row, include two openly homosexual organizations, “Boston Pride” and “Out Vets.”  This comes despite aunanimous Supreme Court decision in 1995 that ruled the parade organizers could not be forced by the Commonwealth to include groups whose message was in conflict with the purpose of the parade.  As C. J. Doyle, head of the Catholic Action League, rightly puts it,

“It is impossible to honor Saint Patrick by showcasing those who not only express pride in rejecting the religion and morality of Saint Patrick, but who deride those beliefs as bigotry, hatred, and homophobia.”