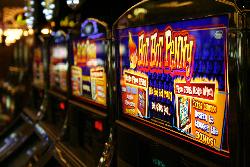 Sen. Jennifer Flanagan (D-Leominster) has filed a three-casino proposal and is encouraging her colleagues to bring it up soon. “I don’t want to see a repeat of last year,” Flanagan told the State House News Service, referring to the expanded gambling bill’s demise last year after a disagreement on slot machines at racetracks. “I think it was important to file the legislation and just get this going.”

So far, ten senators have signed on as co-sponsors of Flanagan’s bill, which is not the only casino bill that has been filed in the Senate. One of the bill’s supporters, Sen. Jack Hart (D-South Boston), told the SHNS that expanded gambling is the “800-pound gorilla” of the 2009-2010 Session, adding that he thought the Legislature should “deal with this sooner rather than later.”

Opponents are not sitting on the sidelines, with Sen. James Eldridge (D-Acton) warning that before a gambling measure is to be considered, a truly independent analysis must be conducted to measure the costs and benefits. Eldridge points out that a “pro-gambling company” completed the analysis done for Massachusetts last year and that one conducted for New Hampshire found a “net negative.”

“We had a very full debate on it this past session,” Eldridge said. “And I think expanded gambling in Massachusetts has so many negative implications on small businesses, on communities, on social costs, that we would need to have a full and fair debate on any bill.”

Senate President Therese Murray said multiple committees would likely hear gambling expansion bills and assigning committee members is “going to take a while.” How soon the bills advance “depends on the committees, whether they take them up early or later or wait and combine all of them.”

MFI remains firmly opposed to any expansion of predatory gambling in Massachusetts. Along with our partners at United to Stop Slots in Massachusetts, we will continue to be a vocal presence at the State House in opposition to casinos and slot machines at racetracks.