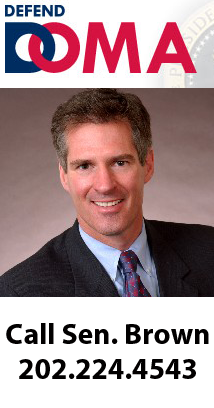 Senate liberals are considering attaching a radical agenda to a bill that funds our servicemen and women through the next year.

You heard that right. Harry Reid, Patrick Leahy and Diane Feinstein, in their quest to repeal the Defense of Marriage Act (DOMA), plan to attach the repeal to the 2012 Defense Authorization Bill, a bill that MUST be passed each year to support the troops. They know they have no chance of passing it on a straight up-or-down vote, and are looking for ways to force it through.

We MUST not let them get away with it.

We know where Senator John Kerry stands on marriage, and specifically on DOMA. He voted against DOMA in 1996 when supermajorities of both the House and Senate passed it and President Clinton signed it.

Conversely, Senator Brown was a strong advocate for traditional marriage while on Beacon Hill, and during his campaign for US Senate last year, he pledged to uphold DOMA when he got to Washington. Though his record since taking office has been troublesome for conservatives, we have no reason to believe he will fold on this fundamental issue.

But we know Massachusetts liberals are pounding him constantly to flip on DOMA and support a repeal. He must continue to receive support and encouragement from us on his principled stand for marriage and DOMA.

Please call Senator Brown TODAY and thank him for his continued support of traditional marriage and DOMA. Ask him to oppose all underhanded efforts by Senate liberals to repeal DOMA and to support any filibuster to prevent the use of the Defense Authorization Act to force same-sex marriage on the American people.

Please stand with us and Senator Brown in opposing the repeal of DOMA.