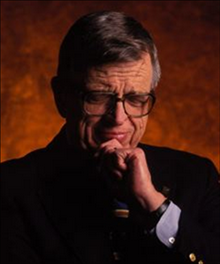 This week, our nation lost a great spiritual leader.  Our beloved Chuck Colson passed into eternity on April 21st after a brief period of illness.  While we grieve with his friends and family, we take joy in knowing that this man, who worked so diligently for God’s kingdom here on earth, is now at peace (and perhaps doing even greater work!) in the Kingdom of Heaven.

Many of the headlines that reported his passing focused, shortsightedly, on his involvement in the Watergate scandal.  However, we know that was far from the culmination of his accomplishments; rather, it was just the beginning of God’s work in and through him.  Colson’s life was an icon of redemption and grace.  After turning to God in prison, Colson shared that love and divine justice with other prisoners through his world-renowned Prison Fellowship Ministries.  He went on to author over a dozen books, many drawing on his former political experience now infused with his vibrant faith.  Two of these works, “How Now Shall We Live,” and “Kingdoms in Conflict,” were an inspiration to me and millions of other Christians who seek to be good and fruitful citizens of both this world and the next.  Most recently, Colson worked tirelessly on the Manhattan Declaration, encouraging us to stand courageously in the public square for life, marriage, and religious freedom.

While Chuck Colson’s gravelly voice and inspiring example will be sorely missed, his legacy of Christian engagement in the world will continue, much of it through the institutions and fellow culture warriors he left behind.  Perhaps we can all take time in the coming summer months to read one of his many books, and remember the awesome work that God did through him, as we prayerfully consider what plans He has for us.