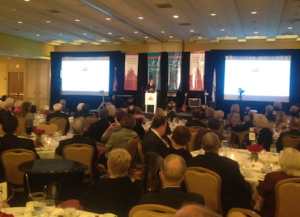 Last Friday, 500 supporters of family values came to the Marriott Hotel in Newton for fellowship and to hear the words of Michael Reagan. Mr. Reagan, the adopted son of President Ronald Reagan and actress Jane Wyman, spoke to some of the anti-family moves taking place in his home state of California,

He then gave very moving testimony about his experience with sexual abuse as a young boy at the hands of a family friend, and the guilt that he carried for decades until the forgiveness of Christ prevailed in his life. He spoke how that forgiveness enhanced his relationship with his father, and the precious final years he had with him as he succumbed to Alzheimer’s disease.

Some of Mr. Reagan’s most passionate comments were about his adoption, and his ongoing commitment to adoption. As pro-lifers, many of us fall into the trap of advocating more against abortion than in support of adoption. The two issues go hand in hand, and part of our life-saving work must be always be advocating for adoption, and making it more affordable for people willing to take on that calling.

We will have a full report on the 20th Anniversary Gala, including coverage of Michael Reagan’s remarks, in the next edition of our newsletter, The MFI Report. If you do not currently receive our mailings, be sure to CLICK HERE to help us complete our membership files.