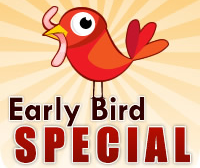 With September 1st less than a week away, time is running out to get your tickets for the 20th Anniversary Gala with Michael Reagan at early bird discounted rates. If you act now, you can save $25 on both admission to the gala, as well as VIP Packages that include access to a private reception with Mr. Reagan.

Anyone who has attended an MFI banquet previously will know these are inspiring evenings highlighted by the keynote address by our invited speaker. This year’s speaker, Michael Reagan, is the son of former President Ronald Reagan, as well as a well-known columnist, author and radio talk show host. With this being MFI’s 20th anniversary, we have expanded the program to include an opening performance by the “Singing Trooper” and dancing afterwards to the live music of Shine Band.

Please take advantage of the early bird rates–$75 for Gala tickets, $125 for the VIP Package—before it’s too late. After September 1, the prices for both will increase by $25 to $100 and $150 respectively.