MassFuture, the official Youth Group of the Coalition for Marriage and Family, had their 4th annual Day on the Hill this past Wednesday. The teenagers and college students who attended had a great time hearing from pro-family legislators and learning how to advocate for traditional values. The Great Hall in the State House was the perfect home for MassFuture’s Day on the Hill with the flags of most all of the Commonwealth’s cities and towns hanging on its walls. 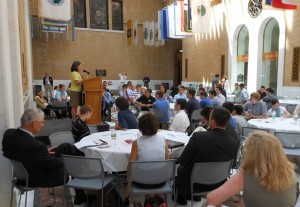 The 85 young adults who attended heard remarks from over a dozen legislators, and met many more, including the “Lyon of the House,” Representative Jim Lyons, whose efforts for pro-family values have been so instrumental. Representative Keiko Orrall told her story of going from being wife and mother active in her community to becoming a member of the House of Representatives in a special election.  They also heard from Representative Peter Durant who told his nail-biting, one-vote victory, and second-election story.

Patricia Doherty, public policy director and lobbyist for the Coalition, told students about the upcoming fight over Doctor Assisted Suicide, and the ballot initiative coming this November. Students also heard from Kris Mineau, Andrew Beckwith, and Maureen Vacca from the Massachusetts Family Institute about upcoming legislation and how to effectively lobby. Beckwith told of the impact that the Bathroom Bill is already having, and how the Department of Education has already extended its application beyond the original scope of the law. For example, a boy that self-identifies as a girl, by law, can now play on a girls’ sports team, and may have access to the girls’ locker room, thanks to new DOE regulations.

After being briefed and energized with pizza for lunch, the MassFuture youth fanned out into the halls and offices of their legislators to share their views with them on these important issues. Many also took some time to watch the debate going on in the House of Representatives. It was an educational and exciting day for everyone.