Young adults from fatherless families are more likely to commit crimes and be incarcerated.

“Over 70 percent of long-term prison inmates come from broken homes, and young men raised in fatherless households are at least twice as likely to be incarcerated as those from intact families.”
– Chuck Colson, as quoted by Eric Metaxas, “Be a Heroic Dad.”
Breakpoint Commentaries, 15 May 2013. Web. 29 Sept. 2014.

“Even after controlling for income, youths in father-absent households still had significantly higher odds of incarceration than those in mother-father families. Youths who never had a father in the household experienced the highest odds.”
– Cynthia Harper and Sara S. McLanahan. “Father Absence and
Youth Incarceration.” Journal of Research on Adolescence, 14:
369-397, (September 2004).

Children growing up outside of two-parent homes, particularly those without a father, have a substantially higher incidence of incarceration as adults. When the Department of Justice conducted surveys looking at the family backgrounds of prisoners in state and federal prisons in the United States, it found that the majority of prisoners, male and female, grew up in fatherless families or lived apart from both parents, with relatives or in foster care.42

In the year 2004, for example, 54 percent of prisoners in state penal institutions and 51 percent of those in federal prisons were raised apart from their fathers or from both biological parents. By comparison, 24 percent of the U.S. young adult population at that time grew up in single-parent or no-parent households.43 This disproportionate representation of children from fatherless families behind bars demonstrates the tragic relationship between family decline and crime. 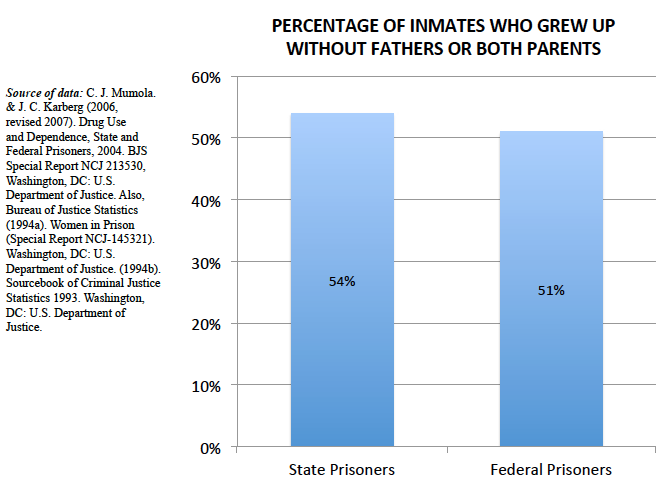 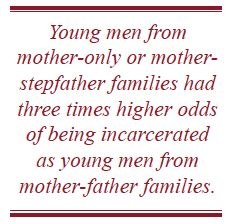 When compared directly against children raised in homes with both biological parents, the impact of broken families on a child’s future criminal involvement is even starker. A study that followed a national sample of 2,846 males from ages 14 through 17 who lived with either one or no parent until they were 30 years old found that 7.5 percent of them had committed crimes and been incarcerated during that time span.44