The common question for many regarding the Justina Pelletier case is, “How is this happening?” Justina’s parents just want their daughter home, but due to the Department of Children and Families (DCF)’s objection to the motion filed by Justina’s parents and her own court-appointed attorney, Justina is still in government custody.

About a year ago, chief of metabolism at Tufts Medical Center Dr. Mark Korson had sent Justina, at the time 14 years old, to Boston Children’s Hospital to see a former colleague who had treated Justina for gastrointestinal problems before, a Boston Globe article relates. Upon going to Children’s, Justina’s diagnosis of mitochondrial disease was disputed by a team of new doctors. They accused her parents of medical child abuse, causing DCF to intervene and remove Justina from her parent’s custody. The state even ignored Dr. Korson’s request to be included in discussing Justina’s care. Despite Justina’s strong objections, she was moved into the hospital’s psychiatric ward. 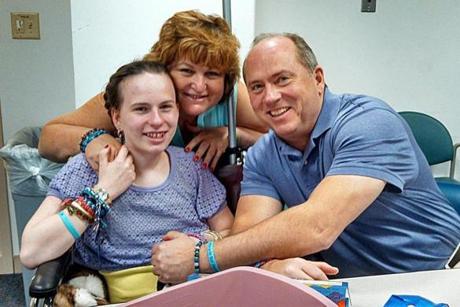 Now, a Massachusetts juvenile court judge has given DCF permanent custody of the teenager, and Justina’s parents are still fighting to get their daughter back from the state. Pro-family Representatives Jim Lyons of Andover and Marc Lombardo of Billerica, who have been striving to help the Pelletier family, released the results of their recent meeting with the MA Health and Human Services Secretary John Polanowicz, whose agency oversees DCF. Not only did Polanowicz fail to explain why the administration has been unwilling to intervene in this case, his own staff appeared to be unaware of even the basic facts of the case.

In addition, Governor Deval Patrick wrote in response to the bipartisan group of 35 legislators who signed a resolution calling for the return of Justina, “DCF does not have the authority to determine when and if custody should be returned to Justina’s parents; that authority is held solely by the court.” If this were true, why is Justina still not home?

In reality, the DCF’s objection is all that is holding Justina back from being where she belongs: with her family. The ignorance displayed by the administration of its own internal procedures, particularly on such a high-profile case, is unconscionable. Meanwhile, the Pelletier family is still suffering, waiting for their daughter to be restored to them. Please continue to keep Justina and her family in prayer as they are still in search of what legal steps they may take to finally bring Justina home.