This week’s legislative hearing on physician-assisted suicide was one of the strongest pro-life showings I’ve seen on Beacon Hill. Working with a broad coalition of both local and national activists on this issue, MFI helped ensure that opposition to assisted suicide had a large presence at the hearing. Nearly a dozen doctors testified against the legislation, including Dr. William Toffler, a physician from Oregon that MFI helped fly out for the hearing. Dr. Toffler works in the same hospital where young Brittany Maynard infamously took her own life when faced with a terminal diagnosis. Maynard’s widower Dan Diaz now works as a paid spokesman for ‘Compassion and Choices,’ the $16 million dollar a year organization pushing assisted suicide all over the country, and he was the marquee witness for the legislation’s advocates on Tuesday. These two men had a respectful but animated exchange outside the hearing room, and it was symbolic of the whole event – emotional narratives met with reasoned, expert medical and ethical objections. 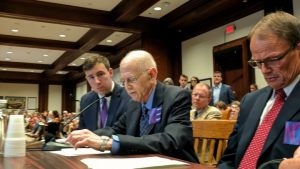 One of the first doctors to address the Joint Committee on Public Health was Bill Lawton, a friend of MFI from Sutton who was determined to come to the State House to testify on this issue despite his own struggle with cancer. In addition to medical professionals, members of the disability community also testified about how assisted suicide presupposes a “quality of life” below which one’s life has no value. They know that this would make them targets in a healthcare system where the ancient safeguard of “first, do no harm” has been removed.

I testified on a panel with a retired Marine First Sergeant turned NH legislator and a former Army infantry office now attending Harvard Law School. They both spoke of the increased rate of suicide that our veterans face as they struggle with serious mental and physical health problems. Normalizing the belief that suicide is right under difficult circumstances makes the job of fighting veteran suicide harder for everyone.

The Committee on Public Health has until next spring to decide what to do with the bill, and we are prayerfully optimistic that it will, as in previous years, expire at the end of the session without coming up for a vote. Assisted suicide advocates are meeting opposition not just on Beacon Hill but in the courts as well. Earlier this month, the Court of Appeals of New York ruled against a challenge to their state’s laws against assisted suicide, saying the government has a strong interest in “maintaining physicians’ role as their patients’ healers; protecting vulnerable people from indifference, prejudice, and psychological and financial pressure to end their lives; and avoiding a possible slide towards euthanasia.” This is good news, since MA is facing a similar law suit from a doctor on the Cape.