Students from fatherless families have a greater risk of academic and behavioral problems. 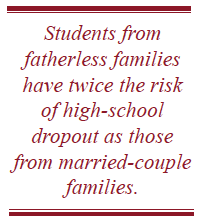 Education begins in the home. Numerous studies show that children living with married parents have a great advantage for academic achievement. Despite the millions of dollars poured into improving failing schools and raising graduation rates, the absence of a father in the home is a factor that simply cannot be overcome by money alone. 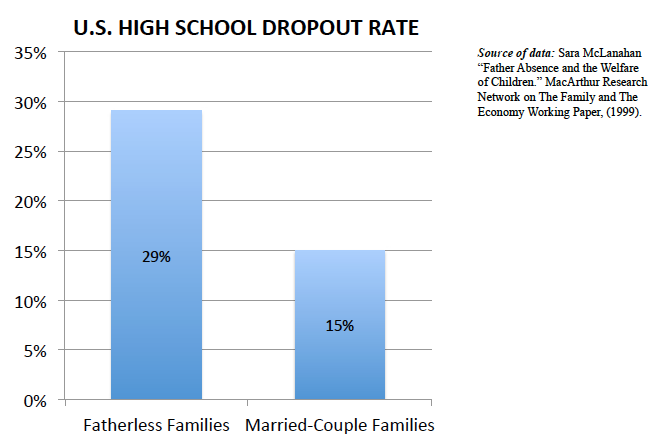 Students from single-parent families have an increased risk of dropping out of high school before getting a diploma. In the National Longitudinal Survey of Youth (NLSY), for example, 29 percent of students from fatherless families dropped out of high school, compared to 15 percent of students who lived with both their birth mother and biological father. The doubled dropout rate was found after controlling for other risk factors that often accompany fatherlessness, such as low parent education and family income levels.30 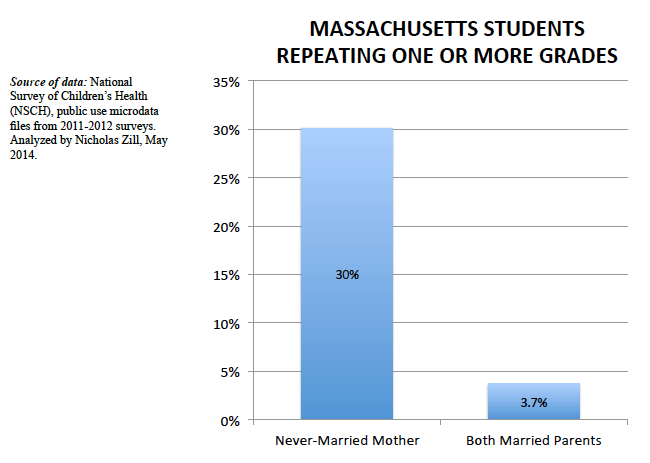 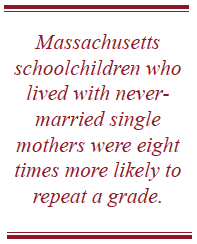 While there are no Massachusetts-specific statistics on the percentage of children from fatherless families who drop out of school, we can infer that they suffer much the same disadvantages as their counterparts across the nation. For example, having to repeat on or more grades in school is a frequent precursor to dropping out.31 In the National Survey of Children’s Health, 30 percent of Massachusetts schoolchildren ages 6 to 17 who lived with never-married single mothers had repeated a grade.  This was eight times the rate of grade repetition among Massachusetts schoolchildren who lived with both biological parents or with two adoptive parents – 3.7 percent.32 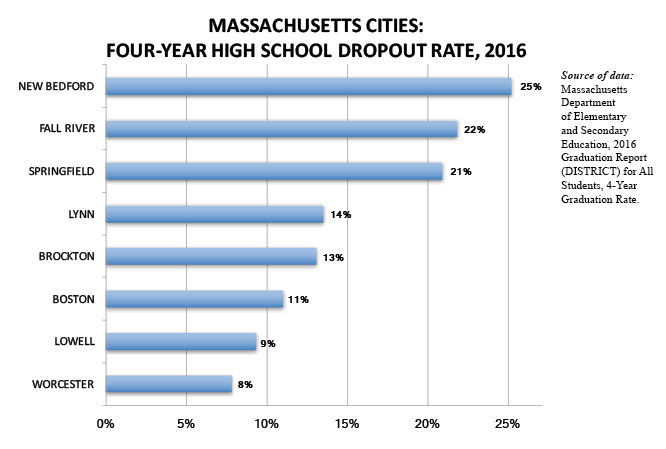 The current high school dropout rate for Massachusetts is 6 percent.33  When we turn our attention to the 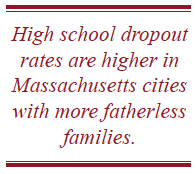 In addition to having higher dropout rates, students from fatherless families tend to have less parental involvement in their schooling. This is evidenced by a decrease in attending PTA meetings, school plays, sports events, or science fairs, and not volunteering at the school or serving on committees.35 The National Household Education Survey found, in a national sample of parents with adolescent children in grades 6-12, that only 14 percent of parents from mother-only families reported high levels of school involvement, compared with 33 percent of those from mother-father families. A 54 percent majority of the parents from mother-only families showed low levels of school involvement, compared with 34 percent of parents from two-parent families who did so.36

When schools do have contact with single-parent homes, it is often to address disciplinary problems. In the National Survey of Children’s Health, 43 percent of Massachusetts schoolchildren ages 6 to 17 who lived with never-married single mothers had one or more problems at school that led to the school’s contacting the 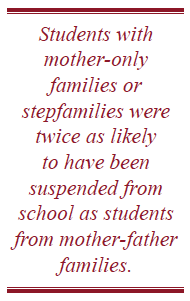 parent. Among schoolchildren living with divorced or separated mothers, 36 percent had one or more problems resulting in the school’s contacting the parent. Both of these groups had higher rates of parent contact than was found among Massachusetts schoolchildren who lived with both biological parents – 25 percent. Controlling for age, sex, race, and parent education level reduced the disparity in contact rates somewhat, but the students with never-married, separated, or divorced mothers still had significantly higher contact rates than students who lived with both biological parents.37

For students who do graduate from high school, their chances of enrolling in and then graduating from college are less if they come from fatherless families than if they come from two-parent families. In a study based on the second National Survey of Families and Households, for example, 61 percent of students from mother-father families who graduated from high school went on to enroll in college, compared with 49 percent of high school graduates from mother-only families. Subsequently, 37 percent of the students from two-parent families got a bachelor’s degree, compared with 17 percent of the students from fatherless families.39

Conclusion: One of the root causes of “income equality” is educational disparity. Young people who fail to obtain a high school diploma are far more likely to have difficulty finding employment and more vulnerable to falling below the poverty level. The economic and familial stability of marriage gives children more opportunity and choice in education and puts them on the path to success.41