This has been a tremendous week for family values in Massachusetts! Citizens of the Commonwealth will finally be able to vote this November to protect their communities from casinos. The entire nation was treated to GOOD news on the issue of protecting the unborn when the Supreme Court struck down MA Planned Parenthood’s “buffer zone,” allowing pro-life counselors to now reach those most in need of their help. And businesses, owned and operated by people of faith, will no longer be forced to pay for abortion-inducing drugs in order to keep their doors open. As an attorney who regularly bemoans the degeneracy of our courts, these recent rulings have begun to restore my faith in the judiciary. In light of these victories, what comes next? 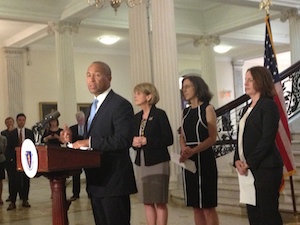 Yesterday, I was at the State House for a press conference where the head of Planned Parenthood in MA, Governor Patrick, and Attorney General Coakley all stood together and pledged to “partner” with one another to defend abortion rights in light of the Buffer Zone ruling.  I had the opportunity to ask the Attorney General, in front of the media pool, if she also planned on “partnering” with pro-life groups to ensure their First Amendment rights were protected.  She gave what amounted to a non-answer, but the question was intended to highlight the fact that our state’s chief executive and top attorney both are more interested in promoting abortion than upholding the Bill of Rights.  They claim that they will have a new bill to address the results of the Buffer Zone case before the current legislative session ends on July 31st.  We and our allies up on Beacon Hill will let you know if Planned Parenthood’s agents try to slip anything through the legislature.  There will be a public hearing on this proposed legislation where we can make our voices heard, and we will let you know as soon as it is announced. Be prepared to contact your legislator and let him or her know you want them to stand for free speech and the lives of the unborn.

Monday’s decision in the Hobby Lobby case also has ties to our Commonwealth. The Green family, owners of the Hobby Lobby franchise, are devout Christians. Although their company is headquartered in Oklahoma City, they have been active in promoting Christian education through their philanthropic giving right here in Massachusetts. The company’s CEO, David Green, donated the campus of the former Bradford College in Haverhill to Zion Bible College (now Northpoint) in 2007, at a cost of $16.5 million. In 2009, Green purchased the former campus of Northfield Mount Hermon prep school and gave it to the National Christian Foundation.

Although much of the media has tried to obscure it, the “Hobby Lobby” ruling was, like the Buffer Zone case, primarily about the forces of abortion trying to silence and control those who stand for life. No one is being ‘denied access to reproductive care.’ The Green family simply could not, consistent with their faith, pay for drugs which cause abortion. They are happy to ‘leave their employees reproductive rights alone,’ by allowing them to use their own money to purchase whatever contraception they deem necessary. In the minds of liberals, abortion has apparently gone from being a right to an entitlement. Fortunately, the Court refused to require businesses owned by people of faith to subsidize that ‘entitlement’ to life-ending drugs. For a good assessment of this case from Massachusetts’ own Pro-Life Legal Defense Fund and MA School of Law professor Dwight Duncan, read here.

MFI was honored to be a named amici (friend of the court) in Professor Duncan’s brief to the Supreme Court on this case, and we commend him for his work.