We got the call yesterday afternoon.  WGBH TV wanted us to join a panel discussion on the Planned Parenthood videos… in one hour.  I was meeting with a pastor up on the North Shore, so there was no way I could get to the studio in time for the taping. 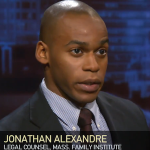 Fortunately, our new Legislative Counsel, Jonathan Alexandre, was up to the task.  At MFI, we take our mission of being the voice for family values in Massachusetts to heart.  For Jonathan last night, this meant having his first media appearance be a debate over abortion policies with former Attorney General Martha Coakley and liberal talk show host Jim Braude – and virtually no time to prepare.  You can watch it here.  I am so grateful for the generous donations that have allowed me to build the MFI team so we can make sure those calls get answered.  Who would have spoken in defense of the unborn if we hadn’t been there to pick up the phone?

One of the best articles I’ve seen on Planned Parenthood this week, believe it or not, was in the New York Times.  Op-Ed Columnist Ross Douthat writes, “So let’s be clear about what’s really going on here. It is not the pro-life movement that’s forced Planned Parenthood to unite actual family planning and mass feticide under one institutional umbrella. It is not the Catholic Church or the Quorum of the Twelve Apostles or the Southern Baptist Convention or the Republican Party that have bundled pap smears and 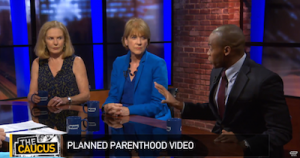 pregnancy tests and HPV vaccines with the kind of grisly business being conducted on those videos. This is Planned Parenthood’s choice; it is liberalism’s choice… that contraceptive access and fetal dismemberment are just a package deal, that if you want to fund an institution that makes contraception widely available then you just have to live with those ‘it’s another boy!’ fetal corpses in said institution’s freezer, that’s just the price of women’s health care and contraceptive access, and who are you to complain about paying it, since after all the abortion arm of Planned Parenthood is actually pretty profitable and doesn’t need your tax dollars?”  It’s worth reading the whole article.

On Tuesday, our banquet speaker Allen West wrote “If we’re serious about women’s reproductive health, we’d take the half a billion dollars away from Planned Parenthood and spend it on research to find cures for ovarian, cervical, uterine, fibroid and breast cancers. Those, Ladies and Gents, are illnesses that affect women’s reproductive health.”  Reserve your seat for October’s banquet today.