I am excited to report that MFI achieved a victory last night for free speech and religious liberty in Chelmsford. Pastor Kendall Lankford of The Shepherd’s Church had planned to host a “Pastor Story Hour” event at the local public library at 11 a.m. today but learned yesterday afternoon that the library had cancelled the event due to woke pressure. MFI quickly took action to correct this injustice.

Pastor Lankford’s event had been featured in a recent Daily Wire article that explained how he and many other pastors across the country have planned these story hours to counteract the rampant LGBTQ+ agenda foisted on children through “Drag Queen Story Hours” and other events at public libraries. The pastor planned to offer a Biblical perspective on gender and sexuality, reading from two books entitled “God Made Boys and Girls: Helping Children Understand the Gift of Gender,” and “Jesus and My Gender.” The media attention that the event received generated many angry comments from leftists on the library’s Facebook page, including allegations that The Shepherd’s Church was a “hate group,” accusations of bigotry and homophobia, and more than a few calls to cancel the event. 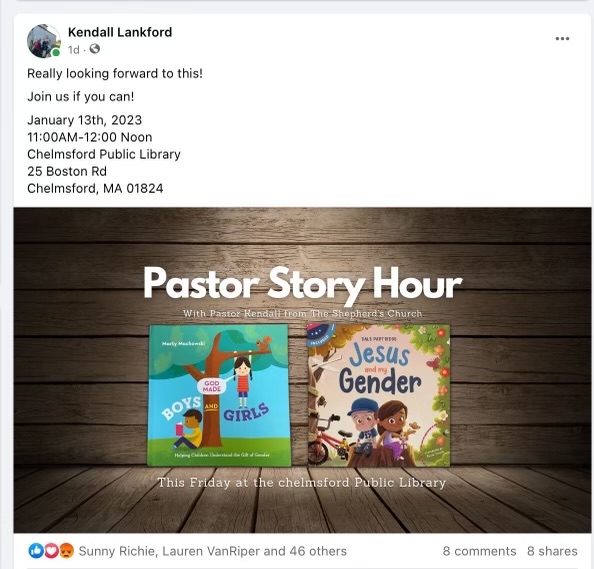 We reached out to Pastor Lankford to offer legal support, just in case he needed it. As it turned out, he did. Less than five minutes after we called him, he sent us an email he had just received from the Chelmsford Public Library stating that they had cancelled his event due to “policy violations.” In reality, of course, the library had simply bowed to the woke mob. As a pretext, they stated that Pastor Lankford had violated their policy against “proselytizing” and had incorrectly indicated that the library co-sponsored his event. Both of these charges were patently false.

After speaking with the town attorney, the library directors wisely chose to correct this injustice. The event is again scheduled to take place at 11 a.m. today at the Chelmsford Public Library. This win exemplifies the need for local organizations like MFI, who can respond swiftly and strongly to the growing needs of people of faith in MA. While we are celebrating this victory, however, the fact remains that in America a pastor shouldn’t need a lawyer to use the library.

Please pray that Pastor Lankford’s event goes off without a hitch today and that the event will serve as a bold witness to the truth of Christ in our spiritually dark state. Due to the local and national media attention this event has already generated, Pastor Lankford expects there to be protestors lined up at the library to oppose his message. But while protestors decry him and his church as haters, bigots, and homophobes, Pastor Lankford will be exercising his God-given right to speak Biblical truth freely – and that is worth fighting for.