Every day it seems there is another story exposing the indoctrination and sexualization of children in public education. Across the country, concerned parents are showing up in record numbers to school committee meetings to oppose transgender ideology, divisive so-called diversity, equity, and inclusion initiatives, graphic sex ed curriculum, inappropriate books in the library, and more. Massachusetts is no exception. That’s why MFI is working hard to protect school children across the Commonwealth.

MFI is First in the Fight equipping parents to take charge of their children’s education through our ever growing Opt Out of sex ed movement. MFI is also working with churches and parent groups to create alternative educational options.

As a result of our advocacy in education over 3,400 students (the most ever!) have been opted out of sex ed classes in the city of Worcester alone. But that’s not all, because of the research and information MFI provides, stakeholders have been motivated to run for and win seats on local school committees. In one MA city four concerned parents were elected to their school committee and are now working on developing an opt-in policy for sex ed classes. Instead of all students being exposed to graphic sex ed curriculum as a default, their new policy would ensure that only students who have signed permission slips participate in sex ed class, protecting them from exposure to harmful content.

MFI isn’t just supporting parents engaging their local school district, however. We also help parents who choose to remove their children from public schools and churches that are working to provide alternatives to public education. Earlier this year, MFI and First Liberty Institute came to the aid of Vida Real, a church in Somerville whose application to open a private, K-8 school called the Real Life Learning Center was being opposed by the local school committee. The committee delayed approval for months, questioning the school’s ability to adequately teach students due to its religious beliefs, particularly on issues of creation and sexuality. MFI and First Liberty Institute sent a letter to the school committee and Somerville School Superintendent Mary Skipper saying that denying the school’s application because of its religion was against the law. The school committee finally relented!  One committee member even admitted, “If we didn’t vote to approve, we’d be sued and we would lose…” Read the full story here and here.

As more people reach out to MFI for help in addressing the crises in education, we have stood in the gap for families and churches,

Listen to MFI director of community alliances, Michael King in an interview with Alex Newman of the New American recap the victories we have secured for our supporters. For more than 30 years, MFI has been on the front lines protecting faith, family, and freedom in MA. That’s why the theme of our 31st Annual Fundraising Banquet is First in the Fight. 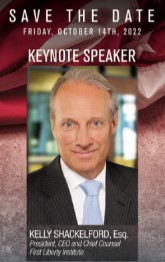 We invite you to join us October 14th to hear our keynote speaker, Kelly Shackelford, Esq., President and CEO of First Liberty Institute, the largest legal firm in the nation dedicated exclusively to protecting religious freedom for all Americans. You won’t want to miss Kelly’s inspiring stories of triumph, including the victory First Liberty Institute helped us secure in Somerville.

You can participate in the good work of MFI by attending our Annual Fundraising Banquet. Register today while tickets last! Or become a banquet sponsor. Each year our banquet sponsors multiply the efforts of MFI through their generous support. Learn more about becoming a sponsor here!