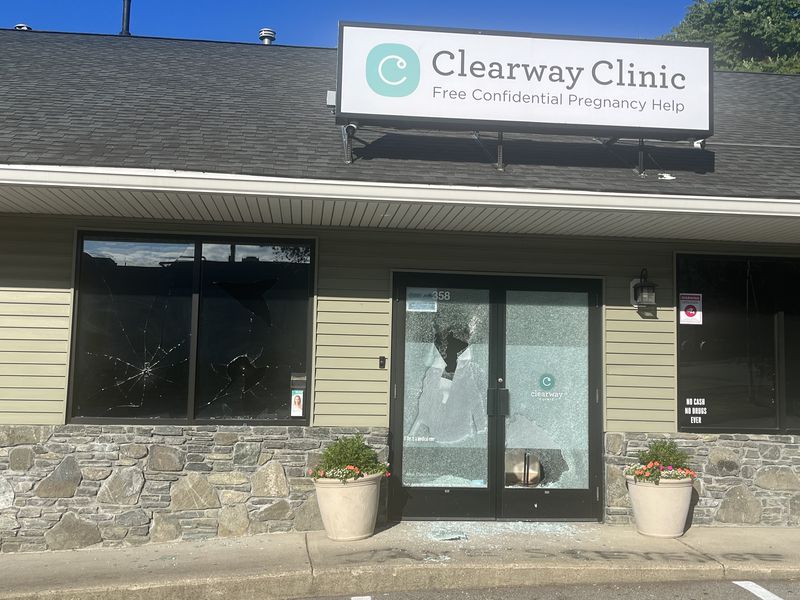 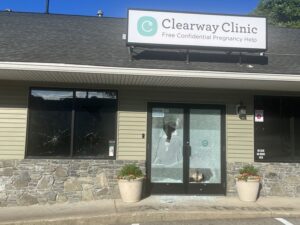 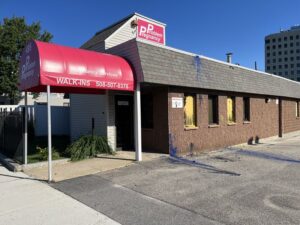 Kelly Wilcox, Chief Executive of Clearway Clinic, wrote in an email to supporters this morning, “The 2 perpetrators were caught on video using a hammer to smash our windows and doors. They also spray painted Jane’s Revenge on the front step. Jane’s Revenge is the terrorist group that has been taking credit for vandalizing and firebombing churches and Christian missions across our nation since the Dobbs brief was leaked. These are cowardly acts of domestic terrorism that are an attempt to scare off our efforts to serve women and families. They will not succeed.”

Kelly is absolutely right, and we need to keep her and all those who are working to help pregnant women choose life in our prayers. We should also be calling on our state and local elected officials to condemn this pro-abortion violence. Unfortunately, what we’re seeing instead is an unprecedented attack on pregnancy centers from some members of our government. For example, earlier last night, Kelly Wilcox spoke at a public hearing in Easthampton, MA, pleading with the city council not to adopt an ordinance that would make it difficult, if not impossible, for pro-life centers to operate or advertise within city limits. A few hours later, her center in Worcester was vandalized.

This violence is disturbing, but it should not be a surprise. Abortion itself is a horrific act of violence, and its proponents are seething with rage from their recent defeat at the Supreme Court. A prime example of this is our own Senator Warren. She has made a point of saying how angry she is, and she’s lashing out by trying to “crack down” on pregnancy resource centers. 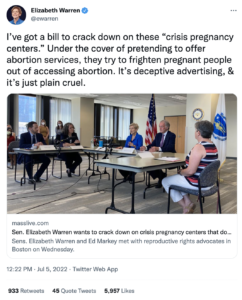 While Warren and other pro-abortion extremists are pushing these bills at the national level, here in the Bay State MFI is working with pro-life residents to defend pregnancy resource centers. Our Community Alliance Director Michael King was part of last night’s hearing in Easthampton and reported that the police officer on duty told him it was the largest turnout at a City Council meeting he had ever seen. Nearly 75 people showed up in person and another 33 attended online. In addition, of the 45 people that testified, 26 testified for life. That is 57% for life! Even in a woke city like Easthampton, pro-life residents outnumber the pro-abortion activists. 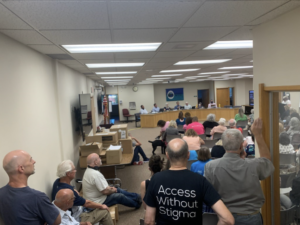 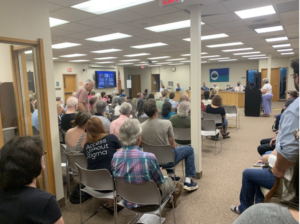 The City Council of Easthampton is considering an ordinance that would fine crisis pregnancy care centers upwards of $500 per incident for “deceptive advertising practices.” A pregnancy care center could be in violation of such advertising practices simply for not offering abortion services. One advocate mentioned that would be like fining Burger King for not offering Kentucky Fried Chicken.

Caught in the crosshairs of this ordinance is Bethlehem House, a pregnancy care center in Easthampton that is a ministry of Our Lady of the Valley Catholic Church in Easthampton. One of the city councilors who proposed the ordinance mentioned in a previous meeting that he did not realize there was a pregnancy care center in Easthampton before proposing the ordinance. Such ignorance of a city leader should be concerning to anyone on either side of this issue. Under this ordinance, Bethlehem House could be considered in violation because they do not offer abortion.

Allies of MFI spoke at the meeting. One retired attorney mentioned that this ordinance is a direct violation of viewpoint discrimination. It only targets pro-life viewpoints. Other advocates agreed that this violates both free speech and freedom of religion. MFI’s Director of Community Alliances, Michael King, spoke at the end of the meeting, referencing the current federal lawsuit in Connecticut that is challenging an almost identical ordinance. Our national ally, Alliance Defending Freedom, is helping in this case. Michael stated at the end of his speech, “Leave Pregnancy Care Centers alone! Don’t undermine the intelligence of women. They know the difference between a pregnancy care center and an abortion factory like Planned Parenthood.”

Due to the pushback, the City Council again voted to send the ordinance back to committee for further review. At the end of the meeting, one of the City Councilors even encouraged his colleagues to further define what a “deceptive advertising practice” is. Perhaps they are concerned they might be part of a lawsuit in the future.

We will keep you posted on these developments. If you would like to support the work of Bethlehem House, you can do so here.

Donations to the two pro-life centers attacked last night in Worcester can be made here at Clearway Clinic Be Their Voice (givingfuel.com) and here at Problem Pregnancy of Worcester, Inc. Donation Site (ppwdonations.org).

PrevPreviousOur Banquet Speaker Just Won a Big Supreme Court Case Yesterday!
NextMassachusetts Pregnancy Resource Centers to A.G. Healey and Senator Warren, “Please Come and See Who We Are and What We Do.”Next