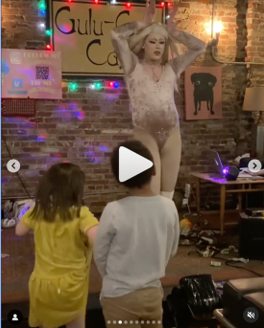 Our culture has become so completely desensitized to the grotesque sexualization of children, people refuse to see it even when it’s right in front of their eyes. This is certainly true of a taxpayer funded group in Newburyport, MA that has hired a drag queen to entertain kids. Predictably, parents voicing concern have been vilified as intolerant, homophobic, hateful, and out of touch.

I grew up just next door to Newburyport. My mother taught in the public schools there for 30 years, and my family faithfully read the Newburyport Daily News long before there was internet. What’s happening now is a brutal reminder of how far the culture in Massachusetts has degenerated. Newburyport Youth Services (NYS), a municipal recreation department, posted the “Over the Rainbow” event with “Miz Diamond Wigfall” on their Instagram page, advertised for kids in grades 9-12. But NYS altered its usual method of advertising youth events, promoting the drag show exclusively on Instagram instead of the email blast typically sent to parents.

The event generated significant push back from concerned citizens after examples of Miz Wigfall’s grossly sexualized performances were discovered online. In response, NYS quickly changed the advertisement’s tagline from “drag yourself to the drag show” to “dance with our DJ Drag Queen.” However, Miz Wigfall remained the key feature for the event. 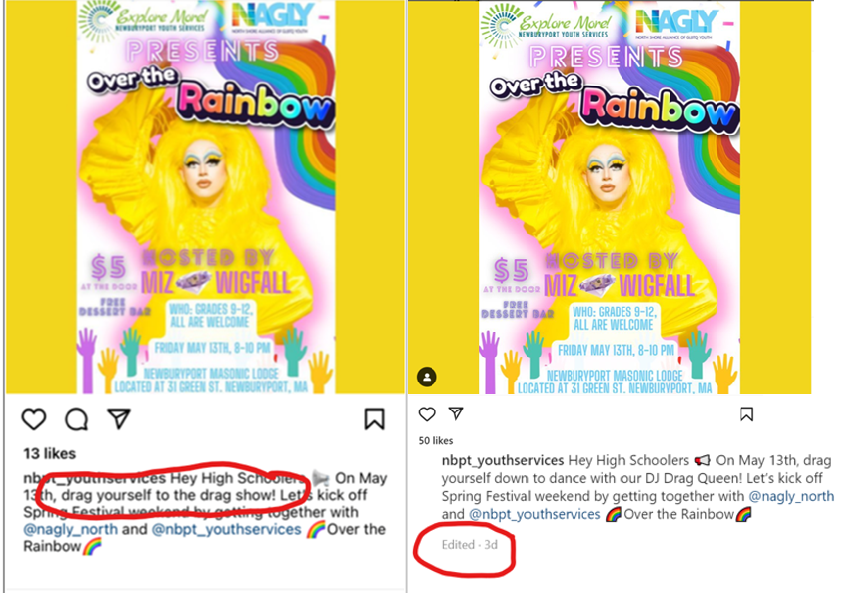 According to its website, “NYS is a municipal department with the mission to create quality programs, events, and services for Greater Newburyport Area youth and families in safe and supportive environments that encourage growth, self-exploration, empowerment, and community. NYS achieves this by applying positive youth development principles…” One wonders which ‘positive youth development principles’ are being applied when a drag queen with a sexually explicit act is hired to entertain kids.

Miz Wigfall, whose real name appears to be A.J. Parker, has a robust internet presence, with nearly 5,000 followers on Instagram and extensive material on YouTube. Several videos feature him discussing and encouraging drug use. In others, he lip-syncs and dances provocatively. In his most recent video, he dances to the song “Coconuts” from the album titled “Slut Pop.” The lyrics are vulgar, and the dance routine is downright pornographic, exhibiting Miz Wigfall performing sex acts that are simply too appalling/disgusting to describe here.

His Instagram content includes overtly sexual pictures, some displaying him partially nude, even posing grotesquely. Perhaps most disturbing of all, is a video of his act which is aimed at children, where he dances sensually in a thong leotard in front of kids seemingly no older than seven.  This is all the more concerning, given that he apparently worked for a time as a dance teacher at Kidville, a chain of daycare centers for children, including a now closed location in Wellesley. 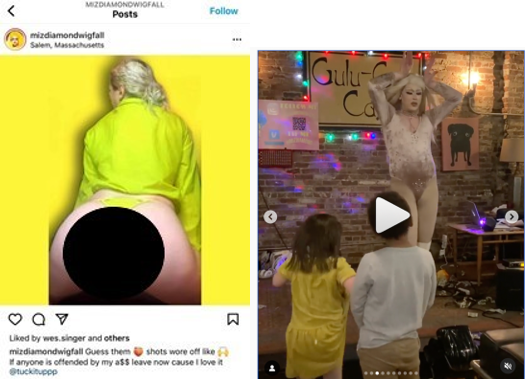 Less than a week ago, AFTER the news broke about this controversy, Wigfall posted this video of him performing what he refers to as a “queer mating dance.”

In a response to concerns raised by many in the community, the Masonic Center withdrew as the scheduled venue for the dance. A growing number of local parents and concerned citizens began speaking out against having a host with such blatantly online sexual content. Right on cue, proponents of the drag queen began fighting back in a fantastic display of woke indignation. Newburyport Mayor Sean Reardon tweeted that “The event has been grossly mischaracterized by a handful of bad faith actors, who are calling it things it is not.” Director of NYS Andrea Egmont echoed this sentiment, calling the parental concerns “homophobic rhetoric”. City Councilor Ed Cameron lamented, “It is concerning that right wing culture wars are coming to Newburyport. What’s next, banning Mickey Mouse from our public schools?” Unfortunately, the Masons ultimately caved to the woke mob and voted unanimously to overturn their decision and host the event after all, this time free of charge.

It is a gross understatement to call Miz Wigfall’s content inappropriate. It is overtly sexual in nature and promotes drug use and promiscuity as this Epoch Times reporter confirms. Despite these facts, Mayor Reardon doubled down on his endorsement of Wigfall’s participation in the event for kids stating, “Newburyport is committed to being a city that is welcoming to all, and to creating supportive programming, safe spaces, and positive experiences for young people.” But hiring a drag queen is neither supportive, safe, nor positive! Exposure to an explicitly sexual entertainer is not only confusing and emotionally damaging to kids, it makes them more vulnerable to predatory behavior from adults.

Drag queen, “Kitty Demure”, offers a commonsense warning “To get kids involved with drag is extremely irresponsible on your part…don’t ruin your child’s life…children should not be part of this culture.”

If we normalize the sexualization of kids, we are abdicating our role as adults in the community, and it is our children who will suffer deeply for it. If, as Mayor Reardon suggests, we want to “provide positive experiences for young people,” shouldn’t we be exposing children to role models who can inspire them toward whatever is true, whatever is honorable, whatever is just, pure, lovely, commendable, and worthy of praise? So, let’s challenge and celebrate them for being good at math, drama or running track. Let’s celebrate their virtues, their kindness, diligence, and courage. Parents must be willing to say what is right and true, even when doing so may have consequences.

Most people, without pressure from the woke mob, would agree that Miz Wigfall is not suitable entertainment for kids, and want to protect children from inappropriate sexual content. Ignoring that instinct to defend their innocence, and the law of good and evil that is written on our hearts, is cowardly. And it is cowardly, at best, for our community leaders to exploit the vulnerability of children, and risk their actual safety, rather than be called a mean name or be perceived as un-woke.

This fear of being labeled “intolerant” has paralyzed many parents and concerned, compassionate citizens in our community. But there are some things that should not be tolerated. Foisting this type of sexual perversion on children is one of them. We must stand strong together against these ideologies and call out evil when we see it. It is part of our mission here at MFI to stand with you and help equip you to navigate these challenging times.

With the dance fast approaching (Friday, May 13th!) here are some vital action steps to take today:

PrevPreviousBREAKING: 9-0 Victory in Boston Christian Flag Case!!
NextNBYPT Drag Show: It was what we thought it would be.Next