Uncle Becky and the Priestesses of Abortion 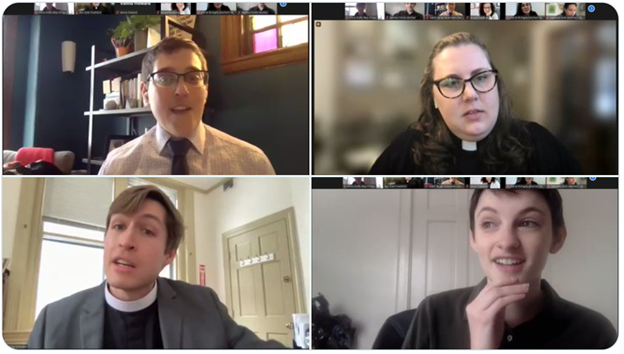 Planned Parenthood and NARAL activists are now disguising themselves as clergy in an effort to dictate what our children are taught about sex in public schools. In a webinar last week billed as “A Faith Perspective on the Healthy Youth Act,” three ordained abortion activists and an Episcopal priest tried to convince members of the faith community that this legislation, which would function as a Sex Ed Mandate, was nothing to be concerned about. The “Healthy Youth Act” has been passed in the Massachusetts Senate several times in the past, but never made its way to the House of Representatives for a vote. Part of the reason for that is that church leaders have spoken out (see here, here, here, here, and here) on how this type of “comprehensive sex ed” runs directly against the faith of their congregations. In response, the hard leftists pushing this filth felt the need to cloak themselves with a veneer of religious acceptability, but they have ended up simply exposing themselves as wolves in shepherd’s clothing. Three of the four ‘clergy’ leading the call all have deep ties to the LGBT agenda and the abortion industry.

For example, the briefing’s moderator, Rev. Kate Froehlich, (top right quadrant above) recently worked as the Membership and Organizing Manager for NARAL Pro-Choice Massachusetts. She proudly claims to have been “instrumental in the passage of the ROE Act,” also known as the “Infanticide” Bill. Kate also “has years of experience working in fundraising and organizing progressive candidates up and down the ballot.”

One of the panelists was transgender Rabbi Becky Silverstein, (upper left quadrant above) who also goes by “Uncle Becky.” She is a fellow at the Schusterman Fellowship, which issued grants of over $150 million in 2019 alone to groups like Planned Parenthood and Advocates for Youth. Advocates for Youth is the author of the K-12th grade sex education curriculum “Rights, Respect, and Responsibility.” You may have recently read the story out of Worcester where an unprecedented number of students, over 3,000 to date, have opted out of “Rights, Respect, and Responsibility” because parents learned that it was neither age-appropriate nor medically accurate. And we’ve been warning for years about the explicit sex education curriculum from Planned Parenthood called “Get Real.”

Another panelist was Martha Schick. The organizers of the briefing described Martha as the Youth and Young Adult Ministries Leader at Old South Church in Boston. What they did not tell listeners is that she is passionate about gender and sexuality “justice,” and lists hosting a “Queer-ed Up Faith Fair” at Emerson College as one of her achievements. Schick also made it clear what type of Sex Ed she wants to teach our children, bragging about her use of the notorious “Our Whole Lives” curriculum. This curriculum for 12 to 14-year-olds recommends the following sexual activities in its section on “Redefining Abstinence”:

Organizers of this briefing also promoted a list of 107 clergy that support the “Healthy Youth Act.”  As you know, MFI has developed relationships with hundreds of pastors in Massachusetts. After looking over the list, we did not recognize one member on it. It is fair to say that legislators pushing the “Healthy Youth Act” are purposely excluding anyone with a differing opinion. This was clearly witnessed by many who listened online.

During the webinar, Nelida Machicote, a social worker in Worcester, submitted the question, “More than 3000 students have opted out of the sex education curriculum in Worcester that legislators deem to be age-appropriate. Why would so many people opt out if they felt it was age-appropriate?” Her question was ignored by the moderator, Rev. Kate. In fact, the moderator did not acknowledge even one question from the 80 people who joined the online briefing. Before she closed the meeting, she stated that there were no questions, knowing that several listeners had submitted them directly to her in the chat.

“This meeting was anything but fair… I know that others submitted questions- but not one was read. These speakers expressed an obvious animus against parental responsibility and control, and a hostility as well to religious instruction. They feigned respect towards those who disagree, and then condescendingly suggested to talk with such parents and tell them this is an ‘opportunity to correct misinformation’ and ‘challenge yourself to grow.’ (quoting Rabbi Becky) It was clear that they believe it is the state with its extreme liberal ideas that has the best interests for all children, not the parents. Pastor Schick stated at one point that she ‘doesn’t want the bulk of students’ sex education to come from churches.’ I was appalled at the sometimes not so subtle hostility towards parents and people of faith who oppose such legislation. I pray that more biblical pastors and Christians will stand up and fight to stop this evil legislation from passing.”

Rheanna Hastings, Executive Director of the Cape Cod Parent Community Coalition, stated: “They said there would be time for other questions and to refer them to Reverend Kate. I did that before the end of the meeting, but Reverend Kate abruptly ended the meeting, stating that there were no questions submitted.”

Pastor Christian Cole from Real Life Church in Somerville summarized the event by saying, “It was made unmistakably clear today that the majority of faith leaders in Massachusetts will not have a voice when it comes to the Sex Education Mandate legislation being passed right in front of us. Legislators have chosen to cherry-pick faith leaders that meet their political agenda. Our youngest to our oldest in schools are under attack and defenseless if we do not stand up at this hour.”

Every parent should be outraged at not only how deceitfully this online briefing was handled, but that it was done in the name of religion. Every Massachusetts resident should call their representative and ask them to oppose the Sex Education Mandate, misleadingly titled the “Healthy Youth Act.”