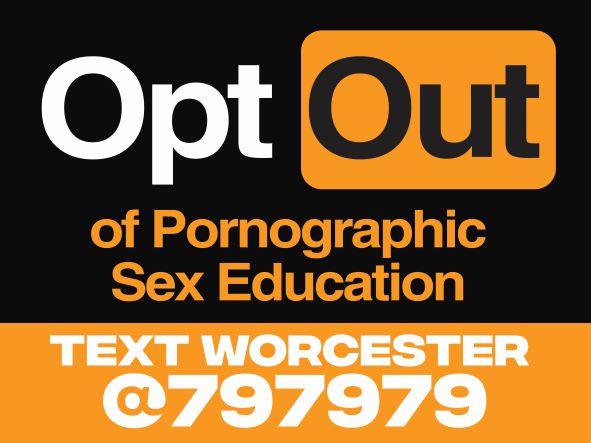 We are confident that concerned parents in Worcester will accomplish this year the most effective OPT OUT of Sex Education movement we have ever seen in Massachusetts!  Watch out Planned Parenthood!  You’ve more than met your match with Worcester parents!

For the past two years, MFI has been working closely with parents in Worcester to protect students from graphic, anti-family Comprehensive Sex Education.  In February of 2019, MFI was present with about 80 other concerned Worcester residents at a school committee meeting to testify against Comprehensive Sex Education.  We were successful and defeated the explicit, pornographic sex education curriculum that Planned Parenthood was trying to push.  You can watch my testimony that night here (Viewer Discretion Advised.)

As you can imagine, Planned Parenthood does not easily give up on their mission to sexualize students at school.  Their business plan depends on developing customers for life-not just for their abortion services, but their lucrative contraception industry.  Planned Parenthood and their close ally, Advocates for Youth, were back at the school committee this year, pushing two explicit, pornographic sex education curricula:  Rights, Respect, and Responsibility and Get Real.

Last May, despite the fact that MFI and concerned residents of Worcester were in the majority speaking out at school committee meetings, the committee voted 5 to 2 to approve Rights, Respect, and Responsibility from Advocates for Youth for Kindergarten through 12th Grade.  Yes, you heard that correctly: kindergarten!  However, this decision has sparked the largest OPT OUT of Sex Education movement that we have ever seen.  And it is just getting started.

The team at MFI has been educating and empowering parents on the issue of sex education, and their right to opt their children out of it, for years.  This year, parents have developed street teams taking that same message door to door in Worcester, explaining the explicit, pornographic nature of the sex education curriculum and the rights of parents to shield their children from it.  They are also showing up in parks and at school as their fellow parents arrive.

MFI has also been working closely with Worcester churches, to get them involved on this important issue.  For example, eighteen local Catholic parishes will be sharing the opt out form in their bulletins at services during the week.  A committed friend of MFI has been active on weekday mornings passing out flyers to parents to educate them on this issue.  In addition, a large Protestant church in Worcester is passing out the opt out forms on Sunday mornings.  Lastly, about 25 Worcester pastors signed a letter to the School Committee and Mayor explaining their opposition to comprehensive sex education in Worcester.  We even worked with the parents to develop t-shirts and lawn signs to alert the community.  Perhaps you have seen some of them around town advocating on this issue.

Parents know they ultimately need to find better representation on their local school committee.  Fortunately, some of the current candidates are passionate about this issue.  Shanel Soucy, for example,  is running for school committee as a mother of three children that have all gone through the Worcester Public School system.  She is making this an important part of her campaign, and is committed to educating parents about the dangers of this explicit curriculum, especially in lower income neighborhoods where she grew up.  She understands that these are the same communities Planned Parenthood routinely takes advantage of.

Lastly, MFI has served as a watchdog in Worcester, making sure that governing officials follow existing Massachusetts’ law regarding this Opt Out movement.  Recently, school and city officials were giving parents a deadline of today to opt their children out for the new school year as well as unlawfully requiring only “sanctioned” opt out forms from the city.  Our President and General Counsel, Andrew Beckwith, got involved and wrote a letter to a principal in Worcester who was advocating such unlawful practices.  Within hours, the principal capitulated and assured MFI he would rectify the situation.

Ultimately, the decision of the school committee to pass explicit, pornographic sex education in Worcester has only awoken parents to the dangerous nature of this curriculum and exposed Planned Parenthood and Advocates for Youth.  The school year has just begun and this movement is picking up steam every day.  MFI is excited about the progress to protect families in Worcester and confident that this movement will set a motivating example for other towns and cities in Massachusetts that are dealing with the likes of Planned Parenthood and Advocates for Youth.  Stay tuned!  We will have more exciting news to share as this movement grows in Worcester!